New in Pride
Home / International News / ‘Don’t Try To Be A Superwoman’: An Interview With Michelle Bachelet, Former Two-term President Of Chile 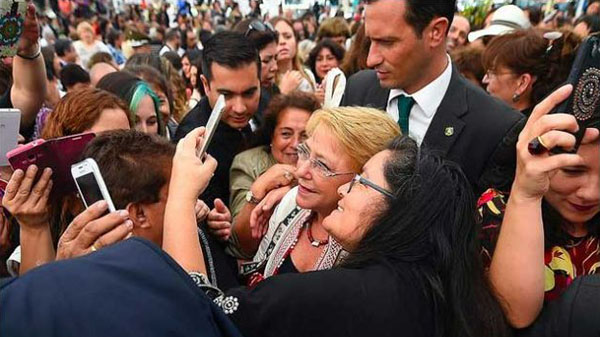 In one of her last public appearances as president of Chile, Michelle Bachelet (blonde wearing spectacles) visits Lo Prado, a community in Santiago, the capital, on International Women’s Day, March 8, 2018. Her advice to women and girls who want to lead an exemplary life in our chaotic times? Don’t try to be perfect.

‘Don’t Try To Be A Superwoman’: An Interview With Michelle Bachelet, Former Two-term President Of Chile

UNITED NATIONS, New York June 5, 2018 (IPS) — Michelle Bachelet ended her second term as president of Chile on March 11, 2018. Her first term, from 2006 to 2010, was marked by an ambitious social and economic agenda advancing women’s rights and better health care. Her cabinet of ministers, for example, was composed of an equal number of men and women, as she vowed to do during her campaign.

During her second presidency, Bachelet, 66, aimed higher in reducing inequalities but met more resistance. Nevertheless, her achievements included free education at the university level, especially for poor students; creating a Ministry of Women and Gender Equality; and decriminalizing abortion.

Her tax-reform measures helped subsidize her social reforms, although some experts contend that higher taxes on the rich and corporations have stifled the economy.

Bachelet’s history of being imprisoned and tortured in Chile is well known. In 1973, her father, Brig. Gen. Alberto Bachelet Martínez, was locked up and tortured after the Sept. 11 coup ousting President Salvador Allende, aided and abetted by the CIA.

Her father died in prison from a heart attack in 1974; soon after, Bachelet and her mother, Ángela Margarita Jeria Gómez, a famous archeologist, were imprisoned and tortured by the Pinochet regime.

Bachelet and her mother sought and won exile first in Australia and then moved to East Germany, where Bachelet worked on her medical degree, married and had her first child.

She and her family returned to Chile in 1979, where she delved into politics a few years later (and separated from her husband). When she first ran for president, she was a single mother of three children.

That’s not all: besides being a pediatrician, Bachelet is a military specialist, having served as the country’s health minister and then defense minister before winning the presidency in 2006.

Bachelet, who between her presidencies was the first executive director of UN Women, is said to be a shortlisted candidate for the next United Nations high commissioner for human rights, though she would not confirm that status.

In an email interview with Bachelet, who has been traveling since March from Chile to Washington, D.C., to Geneva, India and back to Chile, she answered questions about her immediate post-presidential life, which appears to be just as active — if equally public — as her job running one of South America’s most democratic countries.

When Bachelet left office, she was the last female president standing in the continent.

In the interview, she touches on her new role in the World Health Organization; how her role as the first female defense minister of Chile, from 2002 to 2004, enabled her to garner the respect from that sector that she needed to run the country; how her mother has supported her emotionally throughout her life; what advice Bachelet gives to girls and women in our chaotic times; and whether she prays (she is an agnostic, she answered). — DULCIE LEIMBACH

Q: You’ve just become a private citizen after your recent four-year presidential term ended in mid-March; how does that feel and what is a routine day for you now? Are you based in Santiago, Chile’s capital?

Michelle Bachelet: I’ve enjoyed going back to my everyday life! However, I haven’t stayed home resting. I’m based in Santiago, I moved back to my house — I lived in another house during my Presidency — and I’ve also been busy opening up my new foundation, which will serve as a space for dialogue and political reflection, without partisan divisions, and that will take on the challenge of articulating a common project with civil society.

Q: Tell us about your new role as co-chair of the High-Level Steering Group for Every Woman Every Child and chairman of the board of the World Health Organization’s Partnership for Maternal, Newborn and Child Health? What do women and girls need the most globally, health-wise? And what is your strategy for attaining these needs? Will it require politicking?

Bachelet: I am very excited about [my] new role in the Partnership for Maternal, Newborn and Child Health. I’ve been working on this issue since the mid-1990s at a national level, and hopefully, will continue to contribute in an international sphere.

The health inequities that prevail all around the world, particularly among women and girls, are not only unjust, they also threaten the advances we have made in the last decades, and they endanger economic growth and social development.

I believe that each country needs to develop an integrated health program for women and girls, strengthening components of the United Nations’ global strategy [Sustainable Development Goals] in early childhood development; the health and well-being of adolescents; the improvement in quality, equity and dignity in health services; and sexual and reproductive rights as a way to empower women and girls worldwide and without leaving anyone behind.

The global strategy establishes ambitious but achievable goals, and I look forward to discussing with states and stakeholders about the required actions needed to ensure that people realize their right to the highest attainable standard of health.

Q: Do you think it helped in your two presidencies that you had been a defense minister of Chile, that you had the trust of the military, especially since you are a woman?

Bachelet: Yes, of course. My family has always been linked to the military world. My father was a general in Chile’s air force and I studied defense issues, focusing on military strategy and Continental defense.

When I was appointed the first woman to occupy the position of Minister of Defense in Chile and in Latin America, my academic and military background was considered an asset and that led to very good relationships with this institution during my time as Minister and during my Presidency.

Q: How did you navigate barriers to your ambitious social and economic agenda in your second term as president of Chile? What personal trait or support did you rely on to deal with barriers in your way?

Bachelet: Since the return of democracy in 1990, Chile has experienced sustained economic growth at an annual average of 5 percent, and became the first South American country to join the OECD [Organization for Economic Cooperation and Development]. However, this strong growth has not meant the end of inequality in access to health or education.

That is why, when I returned in 2013 to run for my second term, I was determined to carry out the kind of social, economic and political reforms that I believed were necessary to make people’s lives better. In order to do that, we have risked political capital and I believe it was worth it, because we had the courage to put Chile in motion, and with it, we have seen Chile change.

Q: Your mother, Ángela Margarita Jeria Gómez, an archeologist, reportedly lives with you; how has her presence helped you as president? Did she keep your spirits up in such a demanding, round-the-clock role?

Bachelet: Although I am very close with my mother, at 91 years old, she continues to be very independent and does not live with me! She is an inspiring, strong, dignified and resilient companion, but also a very affectionate and supportive presence, especially during the harder parts of being president. I am thankful for her companionship me during these past years.

Q: Chile is a predominately Catholic country; do you practice that religion? Do you use your faith to manage your life and the political obstacles? Do you pray?

Bachelet: Chile is a diverse society with different religious beliefs, cultural backgrounds and socioeconomic realities. I, however, am agnostic and believe in the diversity of opinions and worldviews, respecting people’s freedom of worship. During my government, we protected religious freedom based on equality and respect.

For example, we supported the Chilean Association of Interreligious Dialogue for Human Development, made up of various organizations, including the plurality of religions found in Chile. We also worked on an interreligious code of ethics for dialogue for democratic coexistence. I am certain that the respectful expression of convictions is good for our country, and enriches us as a society.

Q: It’s relatively easy to advise women and girls to persevere in seeking the life they want — in education, work and as a person — but what is the most important thing for women and girls to remember in trying to lead an exemplary life, especially in our chaotic times?

Bachelet: I get asked this question often and my answer is always the same: don’t try to be a superwoman or a super girl, because it will only bring frustrations. Instead, seek the help of someone you can count on. Be assertive but also learn the art of dialogue, learn to communicate. And, of course you should have a sense of humour!

*Dulcie Leimbach was a fellow of the Ralph Bunche Institute for International Studies at the Graduate Center of CUNY from 2012 to 2017. She is the founder of PassBlue, for which she edits and writes, covering primarily the United Nations, West Africa, peacekeeping operations and women’s issues. For PassBlue and other publications, she has reported from New York and overseas from West Africa (Burkina Faso, Mali and Senegal) as well as from Europe (Scotland, Sicily, Vienna, Budapest, Kyiv, Armenia and The Hague). She has provided commentary on the UN for BBC World Radio and Background Briefing with Ian Masters/KPFK Radio in Los Angeles.

PassBlue is an independent, women-led digital publication offering in-depth journalism on the US-UN relationship as well as women’s issues, human rights, peacekeeping and other urgent global matters, reported from our base in the UN press corps. Founded in 2011, PassBlue is a project of the New School’s Graduate Program in International Affairs in New York and not tied financially or otherwise to the UN; previously, it was housed at the Ralph Bunche Institute for International Studies at the Graduate Center of the City University of New York. PassBlue is a member of the Institute for Nonprofit News.