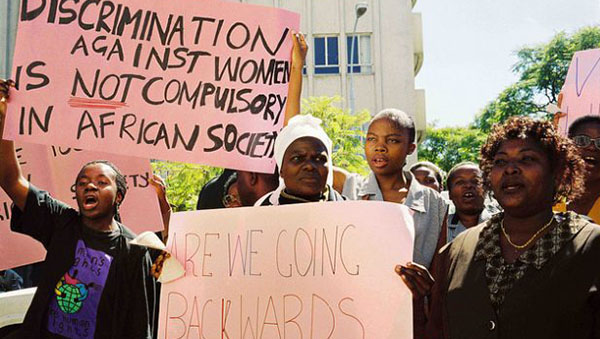 BULAWAYO, Zimbabwe June 5, 2018 (IPS) — Zimbabwe goes to the polls, in July, for the first general election since the departure of Robert Mugabe, and the jockeying over who will represent the country’s major political parties is in full throttle.

Primary elections are internal processes, by political parties, to allow aspiring candidates to contest among themselves, with the eventual winner being the one who will represent the party at national elections.

As soon as the political parties announced the primaries in April this year, thousands of candidates submitted their names, with sitting parliamentarians also having to contest in what the ruling party, Zanu PF, said was a sign of democracy.

However, from the lists that were released by Zanu PF and the main opposition, Movement for Democratic Change, the roster was dominated by men, with women largely staying away.

This, at a time, when there is a huge global drive towards realising the United Nations-driven Planet 50-50 by 2030 gender equality campaign in public office positions, by year 2020.

One female Zanu PF legislator, hoping to retain her parliamentary seat, complained, last month, that she was being intimidated by aspiring male candidates, reporting that the men were going around telling prospective voters not to vote for a woman.

She eventually lost the election to a male candidate.

It was one of many troubling reports, concerning women aspiring for public office, with political parties accused of failing to address these concerns.

Glanis Changachirere, Team Leader at the Institute for Young Women Development (IYWD), which lobbies for women’s participation in political processes, says women seeking public office are still marginalised by political parties and discouraged from participating, because of widespread political violence.

“It is worrisome that as we enter the second term of the Constitutional provision for gender parity, women’s political representation is under threat,” Changachire told IPS.

“Leads from Zanu PF primary elections are indicating a regression in women’s representation. Women only constitute 8 percent of that party’s parliamentary and senatorial candidates. There are examples, in some provinces, where there was not a single woman elected in the primaries,” she said.

“It’s evident that the political space, despite constitutional provisions, is overall not conducive for women and intra-party violence against women is very high.” — Glanis Changarirere

The ruling Zanu PF announced the final list of parliamentary candidates on May 3, revealing that the preliminary results were dominated by men, with women, who were seeking re-election, failing to make the cut.

Some of the losers, who again were dominated by men, contested the results in 10 constituencies, citing, among other things, political violence against their supporters, forcing the party to call for a re-run.

“It’s evident that the political space, despite constitutional provisions, is, overall, not conducive for women, and intra-party violence against women is very high,” Changarirere said.

Perhaps highlighting the extent of the odds stacked against women, Oppah Muchinguri, Zanu PF’s first-ever female national chairperson, who was elevated to the post, last year, and sought to retain her parliamentary seat, was one of the heavy casualties in the primary elections.

Under the Zimbabwe constitution, adopted in 2013, 60 uncontested seats are reserved for women in the legislature, in what is termed proportional representation, where political parties nominate female candidates, based on the number of seats the party won in the general elections.

In the 2008 elections, only 34 women made it to the 210-member parliament, and a decade later, political parties are still struggling to make up the numbers that meet their commitment to global standards.

In 2013, the number grew to 86 elected female legislators, an increase of 39 percent, according to UN Women statistics.

According to Morgan Komichi, the Movement for Democratic Change (MDC) national chairperson, the party has set aside 50 percent of parliamentary seats for women, but from the number of women who have expressed interest in actually contesting the primaries, Zimbabwe’s main opposition could well be lagging behind, in realising its own gender-balance benchmarks.

“The patriarchal and primitive thinking of women playing second fiddle roles — for example, women are expected to sing and ululate and provide care work roles in political parties — are still entrenched. No deliberate mechanisms [exist] to ensure proportional presentation of women in key leadership positions and government line-up,” Changachirere said.

However, the political opposition MDC national spokesperson, Tabitha Khumalo, told IPS that the MDC had ratified the Women’s Charter, as set out by the Southern African Development Community (SADC) Protocol on Gender and Development, targeting 50 percent women’s representation in decision-making, and already has provisions to allocate gender in the party, but it was up to the women to take up the mantle.

“There is a belief that women should be handed political office. They should go out there and work for it. There are constitutional provisions to meet these standards, my question is: who lobbies who, to get those numbers?” Khumalo told IPS.

One-time deputy prime minister and former MDC vice president, Thokozani Khuphe, who was expelled from the party in March, has since formed her own splinter political party, accusing rivals of denying her the constitutional right to lead the country’s largest opposition political party.

Khuphe accused her rivals of sexism, saying it was clear they did not want a women to lead, vowing that a woman is also constitutionally empowered to lead Zimbabwe.