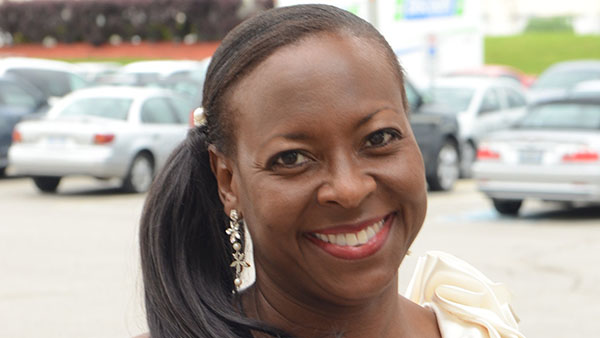 OAKVILLE, Ontario — The recently-elected, majority government of Barbados — headed by its first female Prime Minister, Mia Mottley — apparently wanted the expertise and services of Oakville, Ontario resident, Kay McConney, as a senator and Cabinet Minister, so much that, last week, it proposed amending the country’s constitution to get her.

Barbados-born McConney, a former consul-general in Canada for her birth-country, was sworn-in as the Minister of Innovation, Science and Smart Technology on Sunday, May 27, following the clean-sweep victory of the Mottley-led Barbados Labour Party (BLP) in the May 24 general elections.

But McConney, a Canadian citizen and former Dean of the CARICOM consular corps — and Rawdon Adams, who holds French and British citizenship and is the son of Barbados former prime minister, Tom Adams — appointed as senator-designates earlier, were absent from the swearing in ceremony for the 12 government senators, on May 31, because they were not qualified for the position, as per the country’s Constitution.

Attorney-General and Minister of Legal Affairs, Dale Marshall, explained to the media, after the ceremony, “….this is because our 1966 Constitution sets out, that in order to qualify for appointment (as a senator) a person must ordinarily be resident in Barbados for 12 months, prior to the appointment”.

He noted, “In the case of Mr. Adams, well-known of significant Barbadian pedigree, the son of Tom Adams, he has been resident in Barbados, having relocated here, almost 12 months ago.

“Kay McConney also a distinguished Barbadian, currently resident in Canada…… was our Consul General in Canada at one point in time. So she now has to resume residence in Barbados.

“This therefore means that we will have to make a Constitutional amendment, so as to provide, that in order to be appointed to be a Senator, you have to be a citizen, which we think is significantly more appropriate than being ordinarily resident.”

The Attorney General then outlined the rationale for the amendment, “We exist in a very global community, and Barbadians have served with great distinction across the Diaspora and other parts of the world, and therefore, we think that it is important for us to make this amendment, so as to be able to allow for all voices to contend, and all individuals, who have a contribution to make to Barbados, to do so.”

Marshall added that the amendment to the constitution will modify the requirement, to be based on Barbados citizenship, as opposed to the 12-month time frame.

The proposed Constitution amendment is receiving some opposition though.

“Why is this necessary?” he asked.

“I find it offensive that they would come to amend the Constitution at a time like this, when there was no notice……The people didn’t know……they didn’t campaign on it, it was not in their manifesto. You don’t just come and amend the Constitution, just like that ….. because they can,” he reasoned. 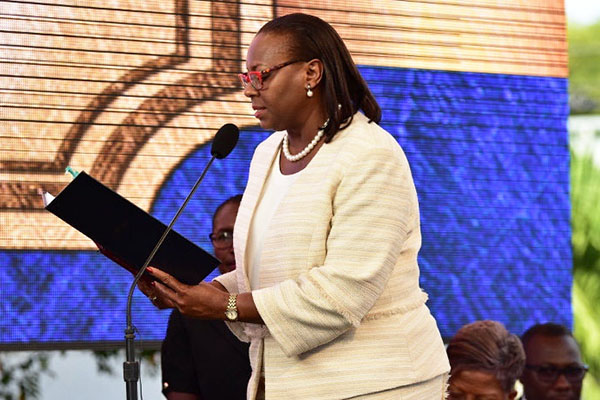 On Tuesday, immediately after parliament convened and Governor General, Dame Sandra Mason, delivered the Throne Speech, Prime Minister Mottley introduced the proposed amendment to the constitution, which the House of Assembly subsequently passed.

According to the prime minister, sections 38 and 44 of the Constitution discriminates against Barbadians, who have sworn allegiance to another country, disqualifying them from becoming a member of the Senate or a member of the House of Assembly.

She explained that her government intended to keep its promise of constitutional reform, adding, this was necessary, due to the fact that the country had significantly changed since the document had been penned 52 years ago.

Now that it has passed its first hurdle, the Constitution (Amendment) (No.1) Bill 2018 will go to the Upper House, for debate on Friday — the newly-appointed Senate’s first meeting, since the recent general election.

Until McConney and Adams are able to be sworn in, the Prime Minister has appointed former government Ministers, John Williams and Delisle Bradshaw, as temporary senators, to act as substitutes, in the interim. 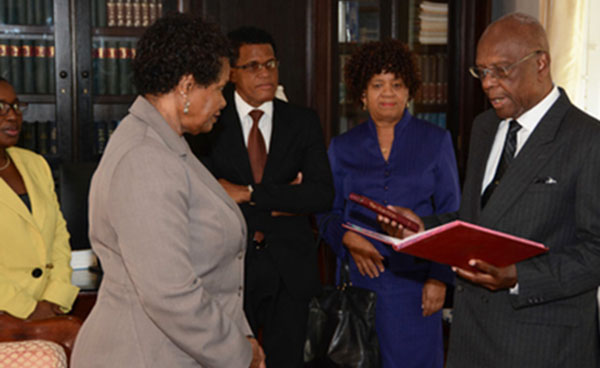 Today Bradshaw and Williams took the Oath of Office before Governor General Mason, at Government House, enabling the Mottley-government to ensure that the Senate passes the amendment Bill.

Once the Constitution is modified, senator-designates, McConney and Adams, will be sworn in, bringing the Senate to its full compliment, in time for its next meeting on Wednesday.