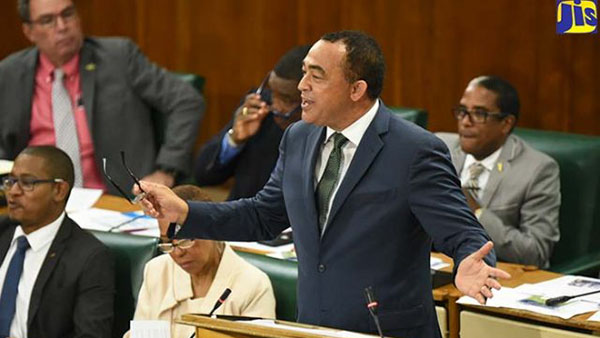 Minister of Health, Dr. Christopher Tufton, making his contribution to the 2018/19 Sectoral Debate in the House of Representatives on June 5. At left is State Minister in the Ministry of Education, Youth and Information, Floyd Green; and Minister without Portfolio in the Ministry of Finance and the Public Service, Fayval Williams. Photo credit: Adrian Walker/IPS.

KINGSTON, Jamaica, June 7, 2018 (CMC) – The Jamaican government will be intensifying the implementation of provisions, under the Public Health (Tobacco Control) Regulations 2013.

According to Health Minister, Dr. Christopher Tufton, this undertaking will include mandatory prohibition of tobacco advertising, promotion and sponsorship, including a ban on point-of-sale tobacco displays; prohibiting the sale of all forms of tobacco products to, and by, minors; and regulating price and tax measures to effectively influence a reduction in tobacco consumption.

He was making his 2018/19 Sectoral Debate presentation in the House of Representatives, earlier this week.

Tufton also said that a public education campaign will be rolled out to heighten awareness about the legislation.

“We are cognisant of the fact that greater enforcement is required, to allow for compliance. So we will continue to sensitise our critical stakeholders to equip them to effectively utilise the provisions of the Regulations in their enforcement procedures,” he said.

The Regulations prohibit smoking in specified public places. These include all enclosed public places and conveyances, and enclosed workplaces; government-occupied buildings; health facilities, including pharmacies; sports, athletics or other similar facilities for use by the public; educational institutions; areas specifically designated for use by children; bus stops; departure and arrival waiting areas at a port or station for any form of transportation.

Tufton pointed out that the government’s plan to intensify the campaign is guided by the need to reduce non-communicable diseases.

“We have to deal with this issue of non-communicable diseases, it is costing us as a country… and tobacco is a major contributor to that,” he added.

“Indeed, that will be your legacy… and it is only right that we take the baton and take it forward, not just because we have international obligations but because it is the right thing to do,” he said.

The government is also working on the development of a policy proposal and road map for the sustainable implementation of a National Health Insurance Plan (NHIP) for Jamaica.

The proposal will address elements relating to the benefits package, which includes levels and sources of financing, legislative changes, provider network, and the requisite administrative and organisational structures.

This is contained in a Ministry Paper, tabled by Health Minister Tufton, in the House of Representatives on June 5.

The Ministry Paper also revealed that the National Health Fund (NHF) signed a six-month contract in December 2017 with Sanigest Internacional for the development of a policy proposal and road map for the design and effective implementation of the NHIP.

“This is in keeping with the Ministry of Health’s 10-year strategic plan and will also closely follow the World Health Organization’s (WHO) strategy for Universal Access to Health and Universal Health Coverage, which was adopted by Jamaica at the Regional Committee of the WHO held in Washington DC in 2014,” the document said.

The Ministry Paper further said that work is well under way on the execution of the consultancy for the development of the NHIP, adding that elements related to the financial review and the expenditure on health have been completed, with the draft proposal, submitted March 2018.

In addition, stakeholder consultations, inclusive of medical groups, the nurses’ association, private insurance companies, pharmacy and diagnostic groups, and trade unions, will be organised to provide comments on the draft proposal.

It is anticipated that by the end of the first quarter of the financial year, the consultancy will be completed, inclusive of the policy proposal and road map.