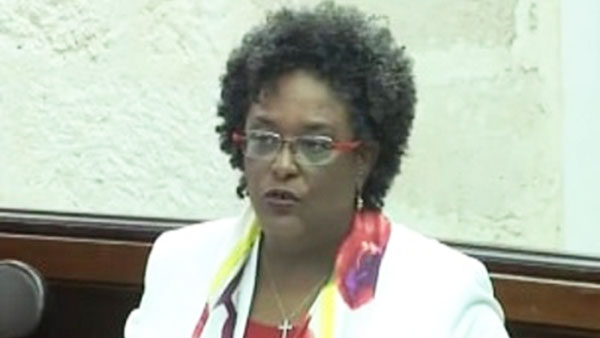 BRIDGETOWN, Barbados, June 11, 2018 (CMC) – The Barbados government said, today, it is prepared to implement “tough decisions” to revitalise an ailing economy, as it announced a series of new tax measures as part new fiscal policies.

Prime Minister Mia Mottley, whose Barbados Labour Party (BLP) came to office, following the May 24 general election, said that she is determined that the island would not be regarded as a “failed state” under her administration.

Presenting her administration’s first financial statement and budgetary proposals for 2018, Mottley said that the new taxes underscored her government’s desire to ensure “the burden must be shared by all of us”, as well as, always protecting the most vulnerable in society.

In her lengthy statement, punctuated by criticism of the policies of the former Freundel Stuart government, Prime Minister Mottley said the Barbados Economic Recovery and Transformation plan is carefully balanced and is in keeping with campaign promises to abolish the controversial National Social Responsibility Levy (NSRL), as well as the road tax.

She described the NSRL, which was applied to the production cost of locally-produced goods, as “distortionary”, saying while it “led to a revenue gain of BDS$145 million, many prices across Barbados rose by double digits, depressing retail sales and …economic activity, generally”.

She said the government expects the removal of the NSRL “will lead, within two months, to a reduction in prices for the average Barbadian”, defending also the removal of the road tax and replacing it with a “more efficient fuel tax”.

She said effective from July 1, the government will introduce a new upper income tax band of 40 percent.

“These new tax rates are expected to raise BDS$41 million in a full tax year,” she said, adding that once the debt to gross domestic product (GDP) falls “to our target, I would like to think that we can anticipate returning to the old rates, but we need to get out of this situation”.

Mottley announced a tax waiver for persons, who reach an agreement with the Barbados Revenue Authority (BRA), for outstanding taxes for the period 2001 to 2017.

Regarding corporate taxes, Mottley said it would increase from 25 to 30 percent effective October 1, raising an estimated BDS$57 million in a full financial year.

The value added tax (VAT) will be imposed on Barbadians engaged in on-line transactions for goods and services.

“We currently do not pay VAT on these transactions. I am advised that the technology now exists for us to capture these transactions for the purpose of taxation,” she said, noting that effective October 1, “we intend to make all online transactions, for the purchase of goods and services by Barbadian residents, subject to the value added tax”, promising to provide further details later.

The government has also announced plans to raise a 2.5 percent Health Service contribution with 1.5 percent of insurable earnings being paid by employers and one percent by workers.

“This measure will come into effect on October 1 and is expected to raise BDS$50 million in a full fiscal year. This will meet more than 25 percent of the budget of the Queen Elizabeth Hospital (QEH), and we will make amendments to the appropriate legislation to ensure that the National insurance Scheme may forward the collected funds to the QEH, directly, for the purpose for which it has been collected,” she explained.

Prime Minister Mottley, who is also the country’s Minister of Finance, Economic Affairs and Investment, said that there would also be increases in departure taxes to offset the collective marketing and product development of the tourism sector, estimated at an average BDS$96 million, annually.

She said the government would review the governance arrangements of the agencies involved in the sector, so as to ensure a transfer of lead responsibility to the private sector for the ownership and management of these entities.

“It is a partnership, because the government will retain minority shareholding and a golden share. It is anticipated that this transition will take place between now and October 1. In order to facilitate the new institutional arrangements, it is intended to isolate the revenue that will be necessary to manage these institutions in the early years.

“Accordingly, my government has decided from October 1st, 2018, to introduce an Airline Travel and Tourism Development fee. This fee that will be paid by passengers flying outside of CARICOM, will be US$70.00, and for those within CARICOM US$35.00. This fee will be in addition to the Departure Tax.”

Mottley said that this measure in a full fiscal year will realize BDS$95 million and that BDS$75 million of this amount will go toward the agencies involved in the marketing of the island, and the remaining BDS$20 million will go towards regulation of tourism, civil aviation and the island’s shareholder responsibilities to LIAT.

In addition, the government is also introducing new VAT fees for hotel accommodation, in keeping with the cost of maintaining the infrastructure.

“Currently our hotels charge VAT for accommodation at a rate of 7.5 percent. It is my government’s view that the fair sharing of the burden of adjustment requires a review of this rate to 15 percent. We, however, accept that to introduce this without a sufficient lead period will cause harm to our hotel sector,” she said, adding that any such rate adjustment should be applicable from January 1, 2020.

“This will provide more than adequate notice for them to plan and adjust their marketing efforts accordingly. In the interim…my government will introduce a Room Levy to be applied to our hotel rooms”, raging from US$2.50 per room, per night, to US$10.

“It should be noted that this sector does not pay VAT on accommodation services and, it is our belief, that most providers fall below the threshold for VAT, hence we believe this to be the fairest solution,” Mottley said, adding that these combined measures should allow for BDS$58.9 million.

The Prime Minister said that the international business sector, which has been under-threat from active pressure by the Organisation for Economic Cooperation and Development (OECD) and neglect from the previous government, will be carefully examined in the coming months.

“I will champion and defend the industry. I will support the private sector task force’s recommendations, which we expect to receive by the end of July this year. In return we are working on ways in which the industry may make a greater contribution and financial impact to Barbados, as we go through this period of structural adjustment.

“Given the uncertainties surrounding the OECD initiatives, we anticipate that we shall be able to address this matter before October 1. We are aware that we will have an improved performance in our Corporation Taxes as a result of the redomiciling of many companies from the United Kingdom as a result of Hybrid Mismatch rules. Our investigations suggest that this activity is likely to result in an increased tax revenue, over a full year, of approximately BDS$60 million.”