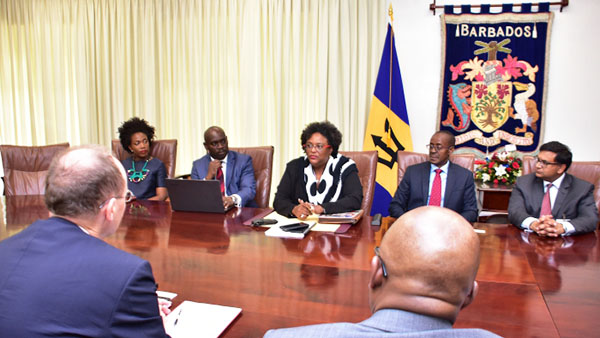 Barbados Public Servants To Get Salary And Wage Increases

BRIDGETOWN, Barbados, June 11, 2018 (CMC) – The Barbados government said, today, it had reached an agreement with public sector unions, for a zero percent increase in wages and salaries for the period April1, 2014, to March 31, this year.

Prime Minister Mia Mottley, delivering her administration’s first fiscal statement and budgetary proposals since coming to office following the May 24 general election, said that agreement had been reached for a five percent increase, across the board, for the period April 1, this year to April 1, 2019.

“Over the past 10 years, workers have played a major role in bearing the brunt of the economic challenges currently besetting us. Immediately on taking office, I mandated that meetings be held with workers’ representatives to consider a new wages and salaries accord for public workers.

“Today we can report that, together, we have agreed that any union demand for settlement, regarding previous periods, is not in the best interest of Barbados. My government cannot agree to any increase for those previous years,” she told legislators, saying that the new agreement reached, would cost the government approximately BDS$60 million.

“It is the single biggest expenditure measure. It represents our commitment to labour and their unflinching commitment to working through the challenges our country faces, together,” she added.

Prime Minister Mottley said the government would, from July 1, 2018 raise the minimum non-contributory pension from BDS$155 to BDS$225 per week, at an annual cost of BDS$20 million, and that for the nine months, beginning July 1, 2018, would cost the treasury BDS$13.5 million, and a full fiscal year, BDS$18 million.

She also announced that there would be a temporary increase to the Welfare Department and her administration’s poverty alleviation initiatives, to the tune of five million dollars annually “until poverty rates fall back”.

During the campaign for last month’s general election, Mottley’s Barbados Labour Party (BLP) had promised to abolish the undergraduate tuition fees for nationals attending the University of the West Indies (UWI), saying this would cost approximately BDS$22 million.

“We will abolish undergraduate tuition fees for those attending the University of the West Indies, with effect from the next semester. In return, we will require each student to contribute to the development of social capital, by giving back a minimum of 100 hours in approved service to the country.

“We will introduce safeguards against the explosion of enrolment,” she added.

The Prime Minister said that her administration would be introducing a Trust Loan program, offering up to BDS$5,000 loans to those entrepreneurs without collateral, on presentation of a viable, basic expenditure plan.

“We will seek to work with the relevant financial institution on implementing this program. This Trust Loan program will cost BDS$10 million in a full year.”

But even as she announced a series of expenditure and other measures, aimed at stimulating the local economy, Prime Minister Mottley said that servicing the multi-billion dollar debt consumes more money than the entire central government’s wage bill.

She told Parliament it consumes more than the education and health budget combined, describing it as a “tight chain strangling our throat, and has for a while.

“Unsustainable debt, traps you in an eternal descent, with no room to move, unable to grasp any opportunities to go forward and modernize. With no prospect of progress, our young people will leave for greener pastures, our entrepreneurs will find no platform for their ideas, and our businessmen will show no appetite for expansion or new investment. Our economy and our country will fossilize,” said Mottley, whose new administration has already entered into negotiations with the Washington-based International Monetary Fund (IMF) for assistance for its economic programs.

“Unless we get our debt down to sustainable levels, it will grow and consume more and more of our budget, leaving no space for anything else, and I mean anything else. With each passing year, we will lose more and more of those vital, cherished aspects like our education, health, our public beaches, and our peace and security. Indeed the downward slide has already started.”

She promised Barbadians that “once we see off this battle” they will be able to invest in their future once more, adding “we will be able to take control of our fate, to make Barbados the best place to live, work, and enjoy life – in a country that is green, climate resilient, that aims to be fossil-free; a smart, technological nation, a digital nation, a culturally rich and diverse nation”.

Mottley said that Barbados is also engaged in a battle to save its local currency, “to defend our choice of free education for all, to preserve our choice of accessible healthcare for all”.

“Mr. Speaker, it is a battle to protect our very way of life, our passion for social justice, it is a battle over the essence of what is Barbados and who we are, as Barbadians,” she said, adding that Barbadians are now engaged in a battle for economic independence.

She promised that her administration would not “hesitate or wait to take difficult decisions”, accusing the former administration of “purposely” dragging out the election date, so that it fell only a few short days from the due date of international payments.

“Making these lumpy payments, against the background of minimal foreign reserves, rising oil prices, rising interest rates, and in the midst of a hurricane season, which started within a week of taking office, would have put our dollar peg in serious jeopardy. This is why we had to take pre-emptive action to protect the value of our dollar and the quality of our life.”

“This is why I described the leaving of the elections to this last moment, as a criminal act against the people of Barbados,” she said, thankful that the electorate had rejected every candidate of the Democratic Labour Party for a seat in the 30-member Parliament.

She said her government’s actions in entering a debt restructuring gives Barbados “breathing space to repair our reserves, return debt to a more sustainable path and pull the Barbados dollar back to safety”.

She added, the previous administration had been defaulting against payments, owed to Barbadians for the past five years.

“Today, these arrears amount to approximately BDS$1.8 billion as of May 31st, 2018 and we are still collecting data. BDS$460 million is owed to the NIS. BDS$345 million is owed to Barbadians and individual companies by the Barbados Revenue Authority, Mottley said, promising to “negotiate and settle legitimate arrears”.

She said that when the total arrears are added up, the government’s debt-to-gross domestic product (GDP) ratio is close to 175 percent of GDP.

“The debt-to-GDP level …puts Barbados amongst the most-indebted countries in the world. The only countries with higher debt-to-GDP ratios are Greece, which has benefited from over US$250 billion of support from European Union institutions and Japan, where deflation and a strong currency has meant that they can service their debts with very low interest rates.

“Neither option, Mr. Speaker, is available to the people of Barbados,” Mottley said.