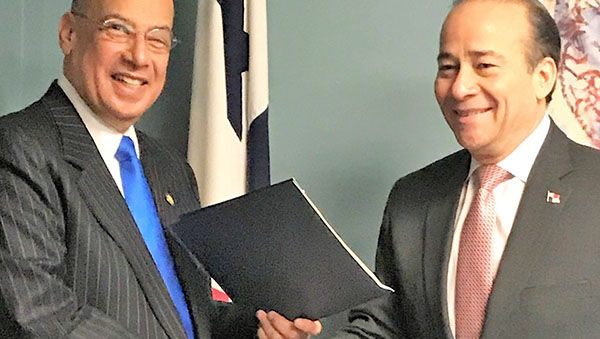 WASHINGTON, District of Columbia June 14, 2018 (CMC) – The government of Panama made a further donation of EC$135,000.00 to the government of Antigua and Barbuda, today, to cover rehabilitating costs, related to Barbuda, in the wake of Hurricane Irma, last September.

In presenting the donation, Ambassador Sierra Victoria noted that it represented the second of two payments, totaling EC$270,000.00, that Panama has made to the government of Antigua and Barbuda, “in a spirit of friendship and solidarity”.

The first payment of US$135,000.00 was handed to Prime Minister, Gaston Browne, in Antigua, by Ambassador, Sierra Victoria, last December.

Responding to the gift from the government of Panama, Sanders recalled the long relationship between Panama and Antigua and Barbuda, beginning with the many nationals of Antigua and Barbuda who worked on digging the Panama Canal, now the world’s busiest and most lucrative trade conduit, linking the Atlantic and Pacific Oceans.

The ambassador thanked the government of Panama for “acting on the recognition that coping with the effects of Hurricane Irma had placed unanticipated burdens on the Antigua and Barbuda Treasury”.

The two ambassadors noted that co-operation between the two nations has steadily grown, particularly in areas of mutual international interests, such as threats to financial services and climate change, adding that they both looked forward to the broadening of relations, to include facilitating shipping and trade in the Caribbean.