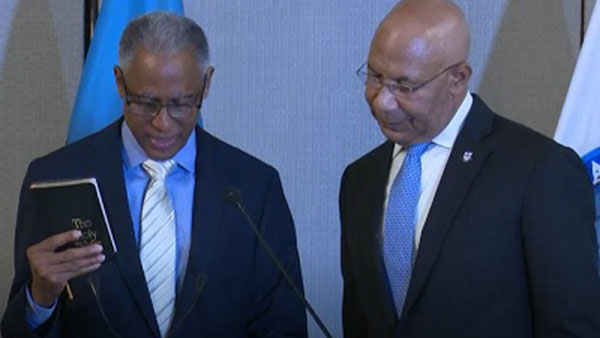 KINGSTON, Jamaica, July 6, 2018 (CMC) – Justice Adrian Saunders was installed as the third president of the Caribbean Court of Justice (CCJ), on Wednesday, expressing disappointment that more Caribbean Community (CARICOM) nations have not yet signed on to the court’s appellate jurisdictions, but hopeful that they will eventually all get on board.

He took the oath of office at the Montego Bay Convention Centre, in Jamaica, on Wednesday evening — ahead of the opening ceremony of the 39th Regular Meeting of the Conference of Heads of Government of CARICOM — before host Governor General, Sir Patrick Allen.

Justice Saunders took over from Sir Dennis Byron, who described his successor as being “thoroughly prepared and unquestionably fit to assume the office of President of the CCJ”.

Addressing the audience that included Prime Ministers, Presidents and Premiers from across the region, and a delegation from the CCJ, the court’s new president expressed disappointment that the vast majority of the 15 CARICOM member countries have stuck with the Privy Council as their final court of appeal, instead of signing on to the Trinidad-based CCJ’s appellate jurisdiction.

He said there was “no good reason to doubt our ability to grasp full responsibility for interpreting and applying our own laws”.

“This is an obligation that is naturally assumed by all civilized peoples. It is remarkable and regrettable that there are still some, who have misgivings about the region’s capacity to discharge that responsibility in an efficient and effective manner,” he lamented, noting that the CCJ has demonstrated its mettle over the last 13 years and the high calibre of its judgements speak for itself.

Only three Caribbean countries have made the CCJ their final court – Barbados, Belize and Guyana.

However, Justice Saunders said he believes that everything is set for the CCJ to become as accepted as other regional institutions, such as the University of the West Indies, the Caribbean Development Bank or the Caribbean Examinations Council.

Among those countries that have not yet signed on is Justice Saunders’ own, St. Vincent and the Grenadines.

St. Vincent and the Grenadines Prime Minister, Dr Ralph Gonsalves, who addressed Wednesday’s inauguration, said he may make another effort for his country to make the CCJ its final court. A referendum on the issue in 2009 failed to get the support his government was seeking.

Justice Saunders has served as a CCJ judge since the court’s inauguration in 2005 and has acted as President numerous times in the past. Prior to his time at the CCJ, he served as a barrister and solicitor for 19 years before being appointed as a judge of the Eastern Caribbean Supreme Court (ECSC). He served as a judge at the ECSC for seven years and was then confirmed as a Justice of Appeal in 2003. A year later, he was appointed to act as Chief Justice of the Court.

Justice Saunders will serve as President for no longer than the statutory period of seven years.