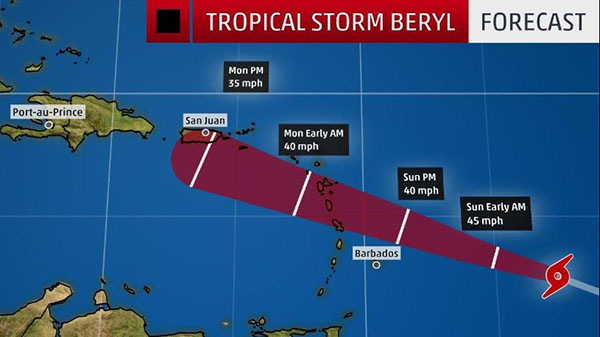 The Miami-based National Hurricane Centre reports that the storm, with a poorly defined centre, was located near latitude 14.0 North, longitude 56.8 West.

Beryl is moving towards the west-northwest, at near 20 mph, and this motion, with an increase in forward speed, is expected during the next couple of days.

On the forecast track, the center of Beryl, or its remnants, is expected to approach the Lesser Antilles today, cross the island-chain tonight, and move near, or south of the Virgin Islands and Puerto Rico, tomorrow.

Maximum sustained winds are near 45 mph with higher gusts. Gradual weakening is anticipated, during the next 48 hours, and Beryl is forecasted to degenerate into a trough of low pressure, as it moves across the Lesser Antilles and into the eastern Caribbean Sea, by tomorrow.