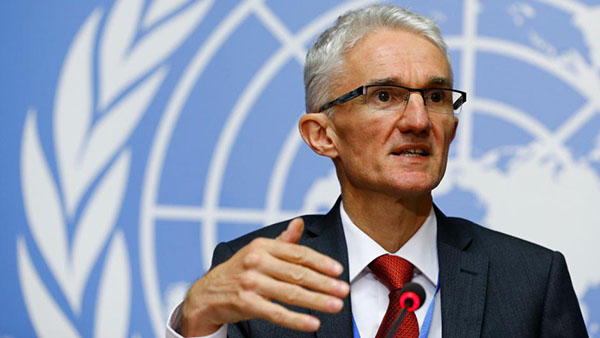 UNITED NATIONS, New York July 8, 2018 (CMC) – The top United Nations emergency relief official has assured the Haitian government, of the organization’s support for its efforts to prepare against hurricanes and stamp out cholera, as he concluded a disaster-preparedness mission to the French-speaking Caribbean nation.

“It was important for me to undertake this mission now – at the start of the hurricane season – to see, for myself, the government-led and regional efforts to prepare for natural disasters,” said Lowcock, about the three-day visit.

The UN noted that Haiti has been hit by successive natural disasters, over the past decade, and added that the UN relief chief met with people, who are still struggling in the disasters’ wake.

“After an earthquake, hurricanes, floods and recurring drought, Haitians’ remarkable resilience has been proven,” Lowcock said.

“But it is no surprise that, after these successive blows and despite joint efforts of the government and the international community, a very sizable number of Haitians still require assistance – not only to obtain life’s necessities, but also to build livelihoods and become more resilient to future threats,” he added.

The UN said Lowcock travelled to several areas of the country. He visited a centre in the northeast, at the border with the Dominican Republic, where returnees and deportees receive assistance and protection services.

The UN official vowed to share their stories with the world, at the Global Disability Summit that will be held in London, later this month.

In the Haitian capital, Port-au-Prince, the UN said Lowcock held talks with the authorities, “where he reiterated the UN’s support for the government’s disaster-preparedness efforts.”

Lowcock praised the government’s commitment to meeting the needs of its most vulnerable citizens, including those who struggle to get enough to eat, and underlined the UN’s commitment to support efforts to eradicate cholera.

However, he pointed out that Haiti needs more international support, as a humanitarian response plan for this year, is less than 10 percent funded.

In Panama, the UN said Lowcock met with top officials, including Vice-President and Minister of Foreign Affairs, Isabel de Saint Malo de Alverado, to discuss the country’s critical role in strengthening humanitarian action in the region.

He also met with regional development and humanitarian partners, and reiterated support for regional preparedness efforts, the UN said.