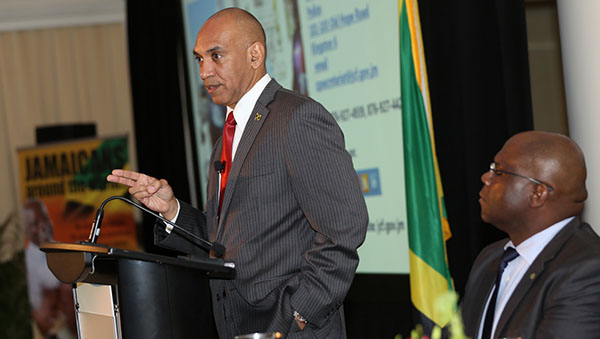 Jamaica's Police Commissioner, Major General Antony Anderson, addresses Jamaicans in Toronto about crime and violence at the JN Outlook for the Future forum in Toronto on July 17. The event, organised by The Jamaica National Group, was held at The Omni King Edward Hotel in downtown Toronto. Beside Major General Anderson is Jerrold Johnson, Chief Representative Officer at the JN Bank Canada Representative Office.

TORONTO, Ontario July 25, 2018 — Jamaican Police Commissioner, Major General Antony Anderson, revealed that the police will be taking a dichotomous approach to the security of Jamaicans, and Jamaica, by treating crime and violence as separate problems.

Reiterating the various measures, which the state has already implemented to secure Jamaica, while meeting with members of the Jamaican Diaspora during the 2018 “Outlook for the Future” forum in Toronto, last week, the Police Commissioner said crime and violence are a hindrance to economic development and, therefore, expenditure on crime must be treated as an investment.

The “Outlook for the Future” series, organised by The Jamaica National Group and in its 15th year, has successfully brought together representatives of successive Jamaican government administrations and key leaders, overseas, to engage in frank, open discussions about issues of national importance to Jamaicans, locally and in the Diaspora.

“We have lost significant amounts of our Gross Domestic Product (GDP) and reduced elements of our growth potential as a result of crime, violence and corruption,” Commissioner Anderson acknowledged.

“We have had decades of flat growth and that kind of environment [creates a] disincentive [for] investment. We have eroded the sense of confidence and public safety, which are required to provide a fertile ground for people to invest,” he continued, noting that the Jamaican Diaspora contributes some 34 percent to the country’s GDP.

“Crime works like a drought or famine, it saps energy from the economy; and it stops people from functioning normally. It does it slowly and it eats away at you for a long time,” the Police Commissioner observed.

The forum, which was also recently held in New York, last week, and Birmingham and London, last month, also provides an environment in which investors can network and explore opportunities for investment in Jamaica. 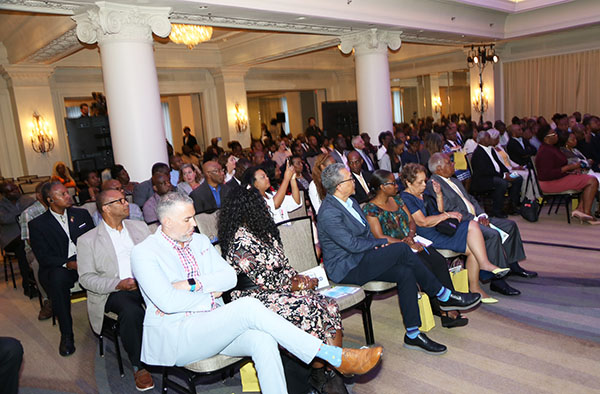 Earl Jarrett, Chief Executive Officer, of The Jamaica National Group, who also addressed the forum, said, “We know that the inhibiting factors to increased investment are the level of crime and violence in Jamaica. And, we recognise that they are of primary concern among Jamaicans locally and in the Diaspora.”

Jarrett added that the harsh realities of crime in Jamaica mean that: “We also need to scrutinize the measures being implemented to eradicate this blight on our country, which seriously hamper citizen safety and development initiatives, in both the government and the private sector.”

Distinction between Crime and Violence
However, Commissioner Anderson emphasised that there is a clear distinction between crime and violence, and, in that vein, noted that efforts were targeted to treat both challenges differently.

“And, therefore, you cannot use violence to stop violence,” he quipped.

He noted that, in that vein, several measures have been implemented, underscoring that the overarching vision for security in Jamaica is encapsulated in the government’s five-pillar strategy, which speaks to: Effective Policing, Swift and Sure Justice, Crime Prevention through Social Development, Situational Crime Prevention and Reduced Re-offending. 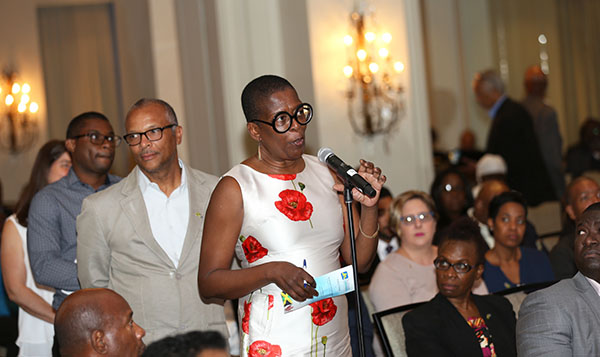 Denise Jones, Chief Executive Officer (CEO) of Jones and Jones Productions, asks questions about the emergence and management of crime in the parish of Portland, Jamaica, during the questions and answers section of the presentation by Commissioner of Police, Major General Antony Anderson.

Managing Violence
In respect of the implementation of the government’s Zones of Special Operation, for example, the Police Commissioner explained that the legislation mandates the use of social intervention, to encourage behaviour change in communities, declared as “Zones” under the Act. He said emphasis is also to be placed on rehabilitation in the nation’s prisons, to reduce recidivism and the further hardening of criminals.

“The average time for people in prison is three years. What that means is that we have three years in which we have their undivided attention, and we can do with those three years as we choose, because they are going to spend three years learning, one way or another,” he highlighted.

Without recusing the police force, he also pointed to corruption in the public sector as a contributing factor to the state of security in Jamaica, which has to be managed and culled.

Managing Crime
With more than 80 percent of murders committed by the gun, stemming the flow of guns into Jamaica is also a major priority in the crime reduction plan, the Commissioner noted.

He also revealed that there was investment in technology to improve the monitoring and response of the security forces and Port Authority, to the flow of weapons and other illegal items, adding that some of the new devices will be rolled out by year end.

In addition, the Commissioner announced that changes will be made to the Firearms Act, to include an “offence to distribute or traffic guns”. Currently, persons can only be charged for possession under the law.