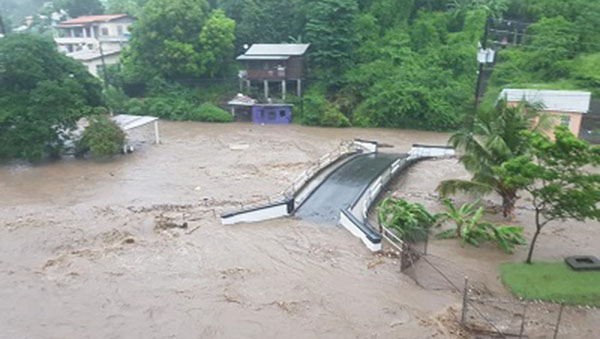 The St. John’s River in Grenada burst its banks.

ST.GEORGE’S, Grenada, August 2, 2018 (CMC) – The National Emergency Advisory Council (NEAC) is meeting, today, to determine the extent of the damage, caused by the heavy rains that pounded the island for more than seven hours, yesterday.

The adverse weather was caused by a tropical wave, interacting with the Inter-Tropical Convergence Zone (ITCZ).

Although the Maurice Bishop International Airport Meteorological Office recorded six inches of rain, it is estimated that the interior of the island received significantly more rainfall.

Acting Coordinator of the National Disaster Management Agency (NaDMA), Sylvan McIntyre, said the agency received several reports of landslides, flooded homes and roadways, and land slippages, but there were no deaths. The national stadium was also flooded, with most of the water coming from the nearby St. John’s River.

“Initial assessments have already started, and these are being conducted by district coordinators in the various areas. However, the formal impact assessment will be done by the Ministry of Works, in collaboration with the Ministry of Finance,” he said.

“The meeting will provide us with a clearer picture of the situation across the island, because we have all our coordinators doing the assessment,” McIntyre added, explaining that the organizational structure of NaDMA is such that, in the immediate aftermath of any national disaster, the district coordinator plays the important role of district assessment.

NEAC comprises representatives from the private and public sectors and it is expected, the impact of the weather on the private sector will also be included in the assessment.

A number of private sector businesses, especially in the Grand Anse, Morne Rouge area, were flooded, as heavy rains transformed roads into rivers.