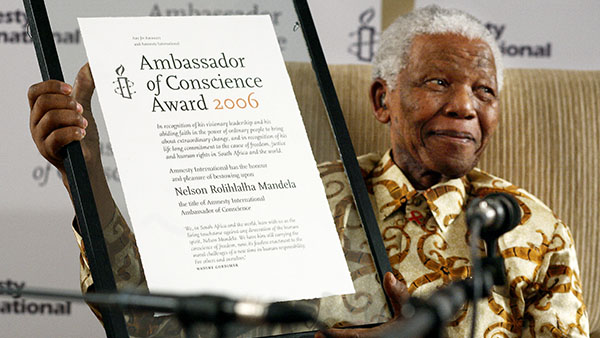 Thursday, August 2, 2018 (NC) — Last month, people around the world marked the late Nelson Mandela’s birthday, now officially recognized by the United Nations as a day for individuals to make a positive difference in their communities.

Mandela was not only the first president of post-apartheid South-Africa, but also a lifelong activist who stood against racism and segregation. He is still widely regarded as an icon of democracy and social justice. In South Africa, he is often referred to as “Father of the Nation.” Internationally, he has received hundreds of prestigious honours including the Nobel Peace Prize and Amnesty International’s Ambassador of Conscience Award.

Mandela’s life of political struggle and self-sacrifice stands as an example to millions around the globe. His grace under pressure, courage, integrity and commitment to healing and forgiveness over revenge and hatred was remarkable.

But years after his death, the struggle for justice and equality continues. In South Africa, grave inequality persists between white and black citizens and xenophobic attacks against migrants from surrounding countries have been deadly. In other countries around the world, oppression persists against minorities, migrants, refugees, members of the LGBTI community, and many other groups.

Still, the ideals Mandela came to represent continue to resonate in the consciousness of South Africans and people around the world, standing out as a rallying cry for dignity and respect of human rights.

Mandela’s legacy is also felt in Canada, a country that supported his anti-apartheid struggle through a diplomatic and economic boycott of the apartheid regime in 1985. Activists were vocal in their opposition to apartheid and Mandela visited Canada shortly after his release from prison as a sign of friendship and gratitude. That feeling was mutual, and in 2001 he was bestowed the honour of honorary Canadian citizenship. Upon his passing, many Canadian politicians and dignitaries flew to South Africa for his funeral as people throughout the country mourned the loss of an icon.

Today, Mandela’s story continues to encourage millions of people around the world to demand equality, dignity and respect of human rights. In Mandela’s own words of encouragement, spoken while accepting the Amnesty International Ambassador of Conscience Award in 2006:

“Like Amnesty International, I have been struggling for justice and human rights, for long years. I have retired from public life now. But as long as injustice and inequality persist in our world, none of us can truly rest. We must become stronger still.”