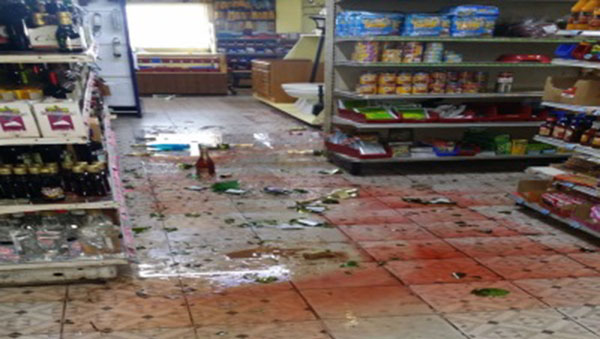 The 7.3 earthquake, which hit South America and the Caribbean, yesterday afternoon, caused some minor damage in this supermarket in Barbados.

The Seismic Unit of the St. Augustine campus of the University of the West Indies (UWI) measured the quake at 6.8, but the United States Geological Survey (USGS) put it at 7.3.

The quake, which occurred around 5:31 pm (local time), was centered near the Venezuelan town of Guiria, and was felt in the capital, Caracas, and beyond Venezuela’s shores.

The quake shook several Caribbean countries, including Guyana, Barbados, Trinidad and Tobago, Grenada, and St. Vincent and the Grenadines.

The National Disaster Management Agency (NaDMA) in Grenada said that the earthquake originated 10.4 North 62.7 West, just off the coast of Venezuela, with a depth of 86km or 54 miles.

“We wish to state, clearly, that Grenada and it’s dependencies are not under any Tsunami watch or warning, the NaDMA said in a statement, adding that “the motoring public and homeowners are advised to exercise caution, as the shaking could have destabilized rocks and or boulders around your home or along roadways, vigilance is therefore encouraged by all”.

NaDMA said it had not received any information of damage caused by the quake, which it said “was the strongest felt on the island”.

In Trinidad and Tobago, where electricity poles fell and people ran into the streets, screaming, Communications and National Security Minister, Stuart Young, in an address to the nation, said that there was no need to panic.

He said the Office of Disaster Preparedness and Management (OPDM) had been in contact with the Tsunami Center in the Pacific “and we received good news that the Tsunami watch and warning had been called off for Trinidad and Tobago”.

He added that while some areas of the island had been without electricity as a result of the quake, the Trinidad and Tobago Electricity Company (T&TEC) was already in the field, seeking to restore the service.

Young said that the police were also out on the streets and “I am happy to report, despite a few reports of sites of cracks, some damage to buildings…the Ministry of Works and Transport has their engineers out and are checking all of the major bridges in Trinidad and Tobago”.

He said the National Gas Company and two other local gas companies, which have a number of pipelines, both on and offshore, “all of their infrastructure has been certified as being structurally safe…and right now, we continue to monitor the situation”.

“We are happy to report, at this stage, there are no reports of anyone being severely injured, we have also been in contact with the various hospitals, health centers…everything appears to be intact and we have no reports of any serious infrastructural damage,” Young said.

Young noted the country should be prepared for aftershocks and urged the population to be careful.