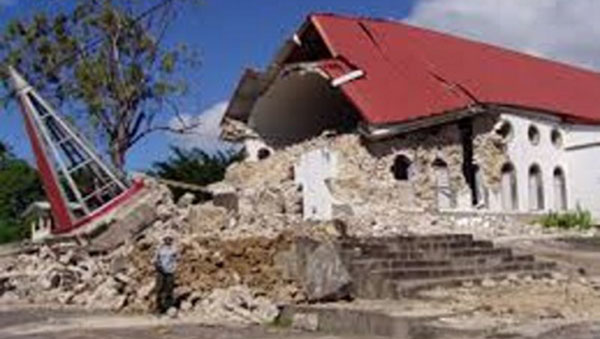 A building that sustained damage from the earthquake and the over-30 aftershocks that hit Trinidad and Tobago this week.

PORT OF SPAIN, Trinidad and Tobago, August 23, 2018 (CMC) – More than 30 tremors have been recorded in Trinidad and Tobago, since Tuesday’s 7.3 magnitude earthquake that rocked the oilrich, twin-island republic, causing widespread damage, the Seismic Research Centre (SRC) of the St. Augustine campus of the University of the West Indies (UWI) has reported.

The SRC said 37 aftershocks have been recorded since Tuesday, and dismissed reports, circulating here, that persons were predicting future earthquakes to hit the country.

“Earthquakes cannot be predicted,” it said, noting that after the mega quake, earlier this week, “aftershocks have occurred and will continue to occur in the coming days and weeks”.

The Association of Trinidad and Tobago Insurance Companies (ATTIC), said, today, that while like the rest of the country, it is relieved that there have been no reports of serious injury and loss of life, there have been reports of “some damage to property”.

“Whilst we are thankful that the country has been spared any major devastation, associated with an earthquake of this magnitude, we take this opportunity to remind the public of the importance of having proper coverage against these and other risks, and wish to advise policyholders, on the steps in submitting a claim, in the event that damages were incurred,” the umbrella insurance group said in a statement.

It said policy holders, who have sustained damages, should contact their respective insurance company, agent or broker and immediately notify them of any claims.

“If your property has been damaged, submit estimates for repairs along with a claim form, if possible.

“Expect to hear from your insurer/agent/broker, who will appoint an insurance adjuster, who will visit the location where the loss occurred, to verify the claim and survey your property,” it added.

ATTIC said that losses, arising within a 72-hour period from the initial event, will be treated as one, including the aftershocks.

Meanwhile, the National Emergency Operations Centre (NEOC) said it is currently coordinating assessments of primarily all critical infrastructure, government buildings, and roadways, subsequent to the earthquake.

The NEOC said it was also warning against the “creation and circulation of fake content…which can cause unnecessary panic or concern to citizens and visitors”.

“As citizens, we must continue to display patriotism by looking out for one another,” it said, adding that priority is being given to the completion of the Initial Damage Assessment (IDA) and Damage and Needs Analysis (DANA) across all sectors, with the focus being directed to governmental/government-used critical facilities, and other building stock.

“The Ministry of Works and Transport (MOWT) has actively initiated inspection of critical facilities. Additionally, the MOWT is coordinating and implementing a national response team consisting of qualified and experienced personnel in building infrastructure.

“This team was dispatched, across all municipalities, on a priority basis, to determine the structural safety of government buildings for occupancy,” it said.

The Ministry of Health said that while all health facilities across the country are operational, all “elective and non-emergency” treatment have been put off, “as is humanly possible” for the time being.

Health Minister, Terrence Deyalsingh, said that has been done to “cater for surge demands”.

Meanwhile, the two Cathedrals in the capital, the Cathedral of the Immaculate Conception and Holy Trinity Cathedral, which suffered earthquake damage, have been closed for repairs.