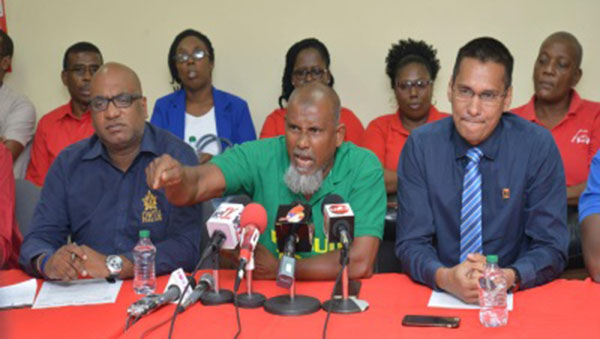 JTUM members at a news conference.

PORT OF SPAIN, Trinidad and Tobago, August 29, 2018 (CMC) – Members of the Joint Trade Union Movement (JTUM), today, announced plans for a day of “rest and reflection” on September 7, as they rallied in support of the Oilfield Workers Trade Union (OWTU) that is seeking to prevent the state-owned oil company, Petroleum Company of Trinidad and Tobago Limited (Petrotrin), from implementing a closure of its refinery.

Petrotrin announced, yesterday, the closure of its oil-refining operations as part of an overall plan to restructure the company that has recorded billions of dollars in losses, in recent years.

Petrotrin chairman, Wilfred Espinet, in a statement following a meeting with the OWTU, said approximately 2,600 permanent jobs will be affected, with all 1,700 jobs in the refinery being terminated.

“Petrotrin has lost a total of about TT$8 billion in the last five years; is TT$12 billion in debt; and owes the government of Trinidad and Tobago more than three billion (TT) in taxes and royalties,” Espinet said, adding that the company currently requires a cash injection of TT$25 billion to stay alive “to refresh its infrastructure, and to repay its debt and even with that, if left as is, it is projected to continue losing about TT$2 billion a year,” he said.

But JTUM members, representing, banking, teachers, nurses, farmers, as well as communication workers, said that they would be directing their membership to stay away from work, next Friday, in protest at the decision to shut down the refinery.

President of the Farmers Union, Shiraz Khan, said the unions were no longer prepared to “take that damn stupidness” from the government of Prime Minister, Dr. Keith Rowley, warning that September 7 is “only the start”.

President of the Trinidad and Tobago Registered Nurses Association (TTRNA), Idi Stewart, said nurses would be instructed to stay away from work, if they are unable to get transportation, as the Maxi Taxi Association said its members would also participate in the day of reflection.

The Trinidad and Tobago Unified Teachers Association (TTUTA) warned that schools “will be devoid of teachers” and union president, Lynsley Doodhai, warned the authorities, “You touch one worker, you touch all workers”.

“TUTUTA expresses its solidarity with the OWTU and to its members who are affected, and we stand to give any support that is necessary,” he added.

President General of the Amalgamated Workers Union, Michael Prentice, said the 80-year-old organisation supported the OWTU’s position to discuss a restructuring of Petrotrin.

“We could ill-afford a war with the labour movement,” he said, reiterating a call for dialogue on the matter.

The OWTU has already indicated that it would “vigorously oppose” the plan to close down the refinery with its president general, Ancel Roget, insisting “that proposal is not to see the light of day at all”.

Roget insisted that the cash-strapped company could be turned around to become a viable entity, and restated that the proposals submitted by the union should be given a chance to be implemented.

He said the union had no confidence in the government, as well as the Board of Directors of the state-owned energy company “and as a result of all of that mistrust and the absence of us involved in the discussions that would have led to that proposal (to close down the refinery) that we totally reject it out of hand”.

“We must use, and we will use, any or every influence that we have, wherever we have it, however we get it, to bring to bear for a viable Petrotrin,” Roget said, adding that with a viable oil company “you can then have sustainable employment”.

Energy Minister, Franklin Khan, has said that Petrotrin’s current state of affairs has the ability to “bankrupt” the country, describing the state’s oil company as moving towards “a black hole”.

Khan told reporters that Petrotrin is also saddled with high operating costs, averaging between US$30 to US$40, for the company to lift a barrel of oil and, when oil prices are US$40, it is obviously uneconomical.