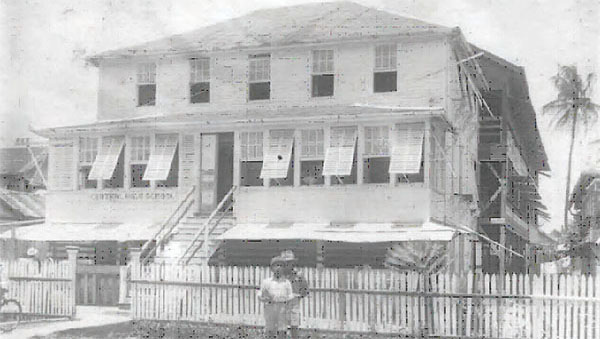 The original Central High School building. The wooden school house was built on the same land where the school stands today. Photo contributed.

TORONTO, Ontario — Amidst the kaleidoscopic pageantry; reverberating, pulsating soca and reggae rhythms; and gyrating waistlines of the recent Toronto Caribbean Carnival season, 160 patrons attended a comparatively subdued, but no less enjoyable and, from the attendees’ perspective, more important and significant occasion.

Alumni — from Canada, the US, Barbados and Guyana — of Central High School, one of Guyana’s venerable and oldest schools, reunited in Toronto to honour its founder, Joseph Clement (J.C) Luck; reminisce; celebrate their alma mater’s history; and discuss ideas to help it deal with recent challenges.

Themed “Rising to honour the past, recognize the present and frame the future of Central High School”, the international reunion, hosted for the third time by the Toronto Chapter of the Central High Alumni Association of Guyana (CHAAG), took the form of a “Meet and Greet” evening on Friday August 3, and a gala on August 4.

During the “Meet and Greet”, alumni met and chatted with Jane (Luck) Chin, the tenth child of the late visionary and founder of Central High School.

She informed her audience, that the nine siblings, who preceded her, were all deceased, and that she was very happy to be in attendance to represent the Luck family. 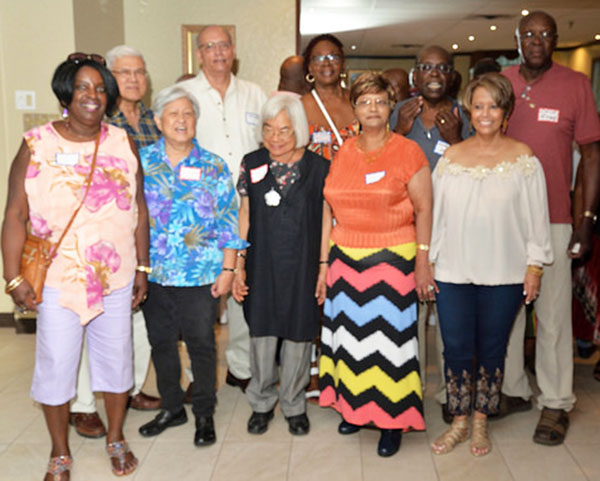 Founder and headmaster, JC, in 1928, started CHS with 35 students — (and an emphasis on excellence and strict discipline) — and built his co-educational school with the help of those students, according to the CHAAG-Toronto website.

“Those who took part in the project earned tuition-free spaces, in return for their work, making benches, desks, blackboards, etc. That concept of a work-study education was perhaps unheard of in those days,” added the site.

CHAAG-Toronto noted that many students also gained free tuition, if they showed promise of having outstanding scholastic ability; extra curricula activities, such as short-hand, typing and adult education, were encouraged; and recreational activities for its students included cricket, football and table tennis.

The school, first built and operated under private management, grew to become the largest, private school in Guyana, with hundreds of students and providing both primary and secondary education, observed the CHAAG-Toronto site.

It added that the Luck family was always at the forefront of education in Guyana, and, in subsequent years, JC’s children — most notably son, Rudy Luck, and daughter, Stella Low — have gone on to head the institution. 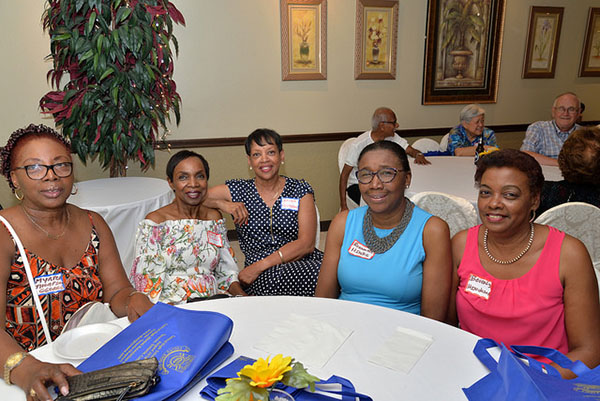 CHAAG-Toronto President, Sharmon L. Carrington, in her message to the attendees of the gala, stated that it was necessary to express gratitude to the founders of the alumni association — James Mangar, Norman Backer, Sugrim Mohan, Rita (Cheong) Graham, Norma (Newport) Brown and Shirley Haniph-Baksh — “whose vision of 1987 is still alive and has brought the Alumni to this point in history”.

“CHAAG not only serves to be guardians of the legacy of J.C. Luck, but also to demonstrate gratefulness for the quality of secondary education its members obtained at this private education institution,” she said.

“It continues to contribute to secondary and post-secondary education of students in Canada and Guyana, via its bursary awards, which have been awarded to students throughout the years of its existence.”

Anyin Choo, Guyana’s Consul General in Toronto, in a written message to the gala audience, expressed, on behalf of the Guyana government, “sincere appreciation and gratitude for the association’s contributions to the social development of Guyana, especially in the education sector”.

She added that the association has provided opportunities to network and give back to Central High School and, by extension, to the people of Guyana.

“Formally listed as the largest, private educational institution in the 1920’s and now one of the top 10 public high schools in Guyana, Central High has given you, and many other students, the foundation for launching their careers, which is the greatest testimony to the importance and the strength of the school,” the Consul General observed.

“Today, Central High School continues to play an important role in modeling the future generations of Guyana and, thanks to your sterling contributions, which have gone a long way in touching the lives of the students, you have made a difference in the lives of your fellow Guyanese.

“The CHAAG’s continued support will certainly go a long way to help secure the future of Central High School and provide prospects for youths in Guyana to obtain  a sound education,” Choo added. 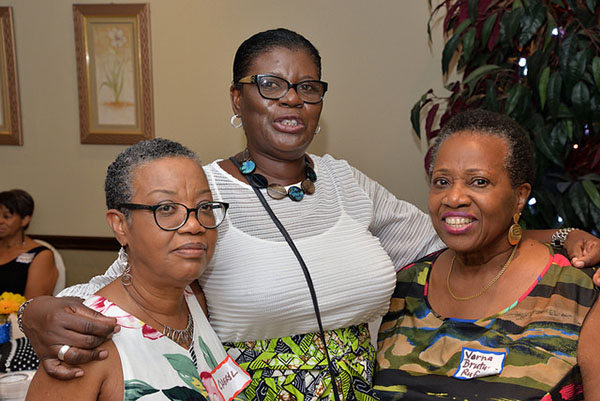 The Keynote Speaker for the gala, Yvonne Sam, also an alumna of CHS’s Class of ’66, delivered a speech that directly encompassed the words and spirit of each aspect of the re-union’s theme for the evening.

Sam, a former clinical Charge Nurse, Nursing Examiner for the Order of Nurses of Quebec and secondary school teacher with the English Montreal School Board for over two and a half decades, is the Vice President of the Guyana Cultural Association of Montreal, and Chair of the Rights and Freedom Committee of the Black Community Resource Centre. 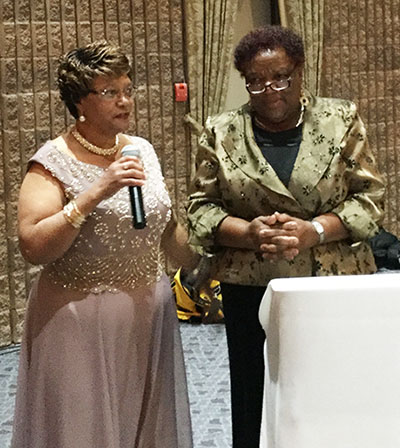 She noted that the experiences and interactions with teachers and fellow classmates, “are a part of whom and what we are today; a striking acknowledgement of not only the importance those school years have had on our lives, but also the undeniable and unalienable fact that Central High always stood as a formidable bastion of academic excellence”.

She sighted CHS’s Latin motto, ‘Cogito Ergo Sum’, translated as ‘I think, therefore I am’, and related that it was emphasized in everything students did, and teachers stood as living models of respect and dedication to that motto.

Sam, the holder of a Masters’ degree in education from McGill University and a mother of two adult sons, elaborated that Central High “was a place where ambitions were fuelled and where our frameworks and philosophies took their roots, and it was the hub for all connections”.

“Surely, it was, and still is, the venue for almost all our firsts towards adulthood, and our classmates remain undeletable in our memories,” she added.

Sam fondly remembered some of her teachers, to whom, she said, she owes a great debt, for molding her into the individual that she has become today: “Education is all about learning, understanding, encouragement and the ability to thrive academically. To learn, one needs to be inspired, and teachers of Central High certainly encouraged and inspired us.

“However, education is not just about individuals, and Central always reflected a fundamental sense of that responsibility -– to continue the quality education for which the school was known; and to educate students, who will know the difference between information and wisdom, and who can situate present-day Guyanese realities in the context of the past, as the country prepares for the future.” 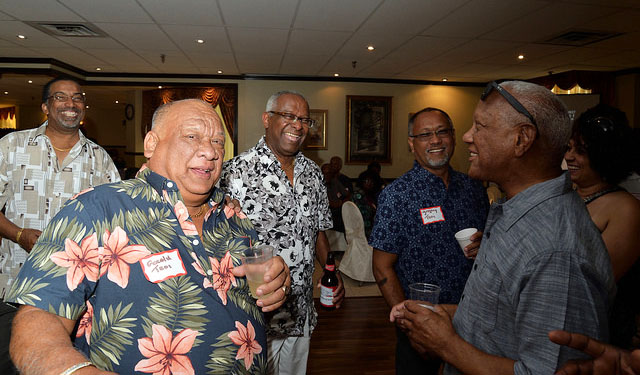 In addressing the framing of the future for CHS, Sam referred to former US President Franklin D. Roosevelt’s statement: ‘We cannot always build the future for our youth, but we can build our youth for the future’.

“The history of Central High instills both expectations and responsibilities as it challenges the youth to inhabit this legacy. No student can sit in any classroom in Central High without sighting the ghosts of lawyers, judges, doctors, or thinking about scientists and actors or aspiring to follow in the steps of musicians.

“We expect the future to be as long as the past, hence, we must act in ways that are not just about tomorrow, but about decades and even centuries to come. This means that we must teach our youth with the intention of shaping the whole of their lives, as well as readying them for what happens when they depart the halls of academia – surmounting the risks of uncharted seas. The history of Central High provides a compass with which to guide,” she acknowledged.

She then shared a nugget of wisdom with her audience, “We must acknowledge the indelible connection to those who came before us, who remind us of what is possible for us by their demonstration of what was possible for them”. 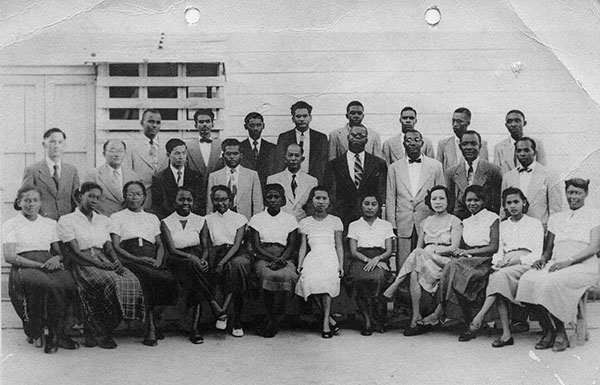 One of the early faculties of Central High School, whose members went on to major achievements in the history of the school. Photo contributed.

Although its buidling remains in private ownership, CHS was taken over by the government of Guyana, which, in April last year, announced that it would close the school.

On February 16, in a statement, the government announced that it was putting that decision “on hold”, after the school’s Board of Directors and Parent Teachers Association (PTA) protested the Ministry of Education.

CHAAG-Toronto, in a letter, penned by President Carrington, had urged the Guyana government against shuttering CHS, citing the important contribution that the school had made, over its 90-year existence, educating thousands and working, assiduously, to improve the country’s education standards and culture.

Carrington wrote, “The world has benefitted, tremendously, from the invaluable contributions of CHS’s students, as they continue to excel in every walk of life in Canada, the UK, the USA, Europe and in every country in which they reside.”

The gala’s keynote speaker, in her address, briefly spoke about this recent uncertainty surrounding Central High’s future, despite the fact that it remains a leader in education, with its students, over the past three years, achieving an 80% pass rate at the CSEC exams.

She said, “The question that immediately springs to mind is, how could one close a school with such academic records to its credit? Who thought of such an idea in the first place?

“Granted, the exterior of the school may be in a state of disrepair, but the heart and soul of the school lies within its faculty and student body.”

And CHAAG-US chapter’s President Cummings, in his written message to the gala, implored his fellow alumni to lift their voices in support of keeping their alma mater open: “Over the past 5 years, our alma mater has been threatened with closure and that threat is no less today, than it was 5 years ago. If, in fact, ‘we think, therefore we exist’, I call on all of us to be that voice, crying in the wilderness, to ‘Save Central High School’.” 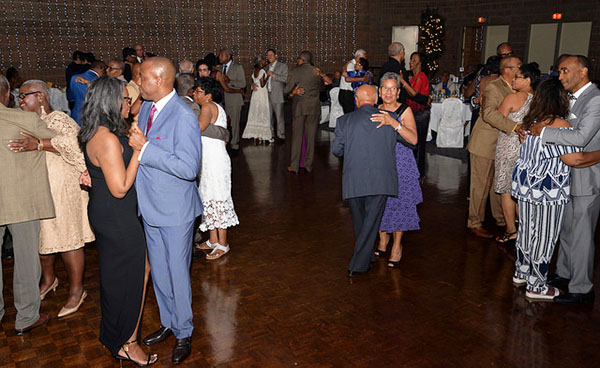