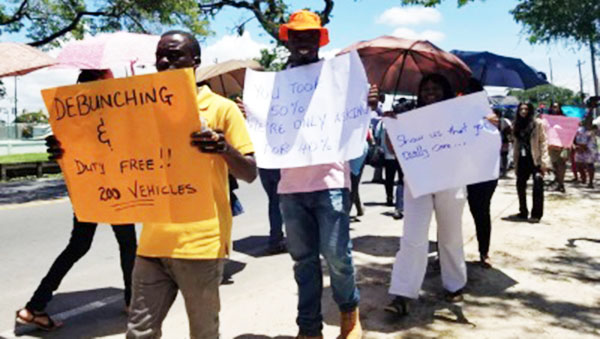 GEORGETOWN, Guyana, August 27, 2018 (CMC) – Teachers began industrial action, on Monday, ahead of next week’s formal opening of the new school term,even as their union indicated that it may not participate in conciliation talks with the Guyana government, on Tuesday.

The teachers stayed away from pre-commencement activities at various schools across the country. Some later engaged in marches and picketing the Office of President David Granger.

President of the Guyana Teacher’s Union (GTU), Mark Lyte, said that his union might not be able to meet with the Ministry of Education on the issue, as the union’s general council is also scheduled to meet on that day.

“General Council meets once per term, that’s once every three months and so it is not something we can push back, because we have a lot of our General Council reps travelling from the interior for tomorrow’s meeting and that meeting goes late into the evening,” he told the online publication, News Source.

The conciliatory meeting was first scheduled for last Friday, but the union failed to attend the talks, aimed at preventing teachers from embarking upon industrial action at the start of the new school term in September. The union said that it had not received information about the meeting on a timely basis.

The Ministry of Social Protection’s Labour Department said it had sent a letter to the GTU president regarding the new date.

Following talks with Education Minister, Nicolette Henry, earlier this month, Lyte, said that the union was maintaining its position, and that teachers would begin their industrial action from August 27.

He said the government is holding firm to its position to offer GUY$700 million to cover across-the-board increases and GUY$200 million to cover de-bunching. The GTU said it is still pressing its demand for a 40 percent wage hike for teachers.

Earlier this month, President Granger said his administration does not want a confrontation with teachers, insisting that the coalition government cannot afford to pay more money to the teachers and urged them to re-consider their position.

Lyte said that the union now intends to seek a new date, possibly Friday, for the conciliation talks and dismissed suggestions that the GTU was playing hard ball with the authorities. He said the union is willing to accept a “proper” offer from the government.

“I think the GTU is making the kind of statement to say that our position is that we are given short notices for meetings, and persons are not enquiring whether we have anything scheduled on those dates”.