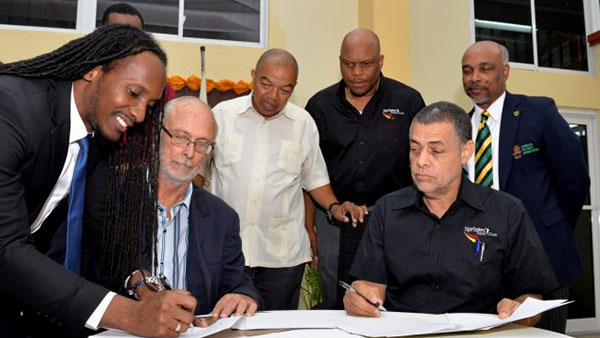 ST. CATHERINE, Jamaica August 30, 2018 — Representatives of the G.C. Foster College of Physical Education and Sport and Sprintec Track Club, which is based at the institution, have signed a Memorandum of Understanding (MOU), formalising their partnership, forged to facilitate training arrangements for world-class athletes.

The MoU, which is expected to span approximately five years, will cover accommodation, nutrition, and basic medical assistance for athletes in training, who are resident in Sprintec’s camp; and market the College’s brand and any other track-related engagements that the signatories may agree on.

In a message — read by State Minister in the Ministry of Culture, Gender, Entertainment and Sport, Alando Terrelonge — Portfolio Minister, Olivia Grange, noted that the MoU will also enable the College to host athletic competitions that foster the development of fledgling athletes.

“They will also partner with the Jamaica Athletics Administrative Association (JAAA) in offering scholarships to national/high performance athletes, who are members of Sprintec,” she further stated.

Grange pointed out that the MOU “signals the start of something great”, and commended the signatories for having the foresight to establish and develop the relationship.

“I hope that this partnership… will continue to grow. I hope that more athletes will emerge from G.C. Foster (College) and become members of Sprintec and, ultimately, represent Jamaica on the global stage,” she stated.

Since 2003, Sprintec has been operating from the College’s campus, when the current head coach and Acting Principal, Maurice Wilson, guided Jamaica’s Christopher Williams to the silver medal in the men’s 200-metre final at the International Association of Athletics Federations (IAAF) World Championships in Paris, France.

In his remarks, Wilson, who outlined the rich history, shared by the College and track club, underscored the pivotal role the MOU will have in shaping the development of athletes at Sprintec, and the potential derivable benefits to Jamaica.

Sprintec athlete, Sherone Simpson, described the MoU as a “wonderful” gesture, and welcomed the partnership’s formalisation, noting that “it is good for the school, club and Jamaica”.