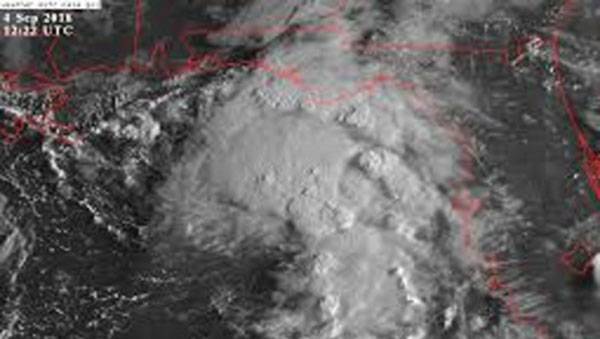 Florence Becomes Hurricane As It Heads Towards Bermuda

The Bermuda Weather Service (BWS) said Florence was 1,629 miles, east-southeast, of Bermuda, and moving, west-northwest, across the Atlantic Ocean, at about 12 miles per hour.

Florence is expected to be within 840 miles of the island by Friday, and advanced forecasts suggest it will come closer after that time.

Florence was packing sustained winds of 75 mph, as a weak Category 1 hurricane, and while it is expected to weaken over the next three days, it is then forecasted to pick up strength again, at the weekend.

“Over the next 24 to 48 hours, Hurricane Florence is expected to encounter increased wind shear, which should prevent further intensification and is likely to cause weakening,”  a BWS spokesman said.

“However, by the end of the five-day period, Florence is expected to re-intensify, as it tracks across warmer seas and an area of less shear.

“This complex pattern leads to some uncertainty, and although Florence is not a threat to Bermuda at this time, it will need to be monitored.”

Meanwhile, Tropical Storm Gordon, which formed, on Monday, near Key Largo and lashed South Florida with gusty winds and heavy rain, was moving through the Gulf of Mexico, where it grew stronger.

It is expected to be a hurricane when it makes landfall, along the Gulf Coast by tonight.

Forecasters are also keeping a close watch on a recently-formed tropical wave, near the Cape (Cabo) Verde Islands, which is being given a 70 percent chance of developing into a tropical cyclone, in the next five days.