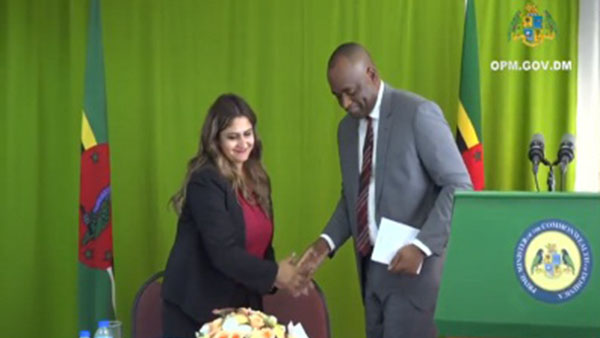 Parliamentary Secretary to the Minister of International Development of Canada, Kamal Khera, said that Ottawa is providing CAD$9.25 million to the Barbados-based Caribbean Development Bank (CDB) for the Dominica disaster recovery resilience project.

She said the funds will be used for the reconstruction and restoration of five primary schools, making them more climate-resilient.

“This will directly benefit more than 1,300 children and 80 teachers,” she said, adding that “this project will also fund Dominica’s Caribbean Catastrophe Risk Insurance Facility premiums, for the next two years, so that essential services can continue in the event of future crisis”.

Khera, who led a delegation that included the Canadian High Commissioner to Dominica, Marie Legault, said that in the wake of Hurricane Maria that struck the island on September 18, last year, killing nearly 30 people and causing millions of dollars in infrastructural losses, said Canada was also providing funding for an CAD$8.2 million project to be managed by the Barbados-based Caribbean Disaster Emergency management Agency (CDEMA).

She said the project will support the implementation of the Caribbean Community (CARICOM) Comprehensive Disaster Management Strategy that would help to strengthen the regional response mechanism.

“This project will improve the regional emergency telecommunications, train specialist response teams and to improve the Caribbean’s risk information system.”

She said Canada will provide funds to CDEMA’s work in Dominica so that there could be the installation of an emergency radio network for the West Coast and train 30 community response and disaster management staff to operate and maintain the network.

Prime Minister, Roosevelt Skerrit, welcomed the assistance from Canada and said the North American country had always played a vital role in the socio-economic development of the island, dating back several years.

“Before we became an independent state, Canada invested, heavily, in our economy and our social advancement,” Skerrit said, adding that he hoped the building of the schools would begin in July next year.

Skerrit, who is moving to have Dominica recognised as the first climate resilient country in the world, said it was also important now, for the international community to move away from just discussing the causes of climate change, to that of finding solutions.

“We, in the Caribbean, are at the short end of the stick, when it comes to the implications and impacts of climate change,” he added.