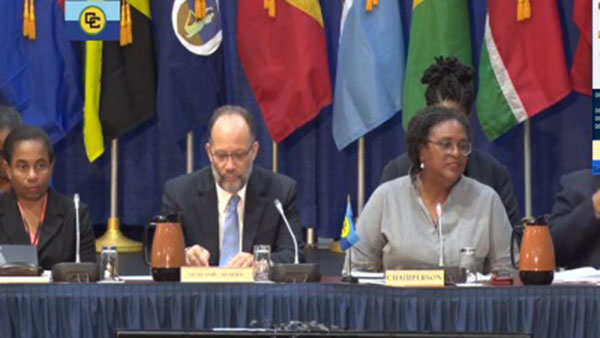 “We have, since Montego Bay, been able to reignite in our people, a confidence that can make this Caribbean project worth our while, and that we can allow it to make a definable difference in their lives,”  Prime Minister Mottley said, as she addressed the opening of the ninth meeting of the Prime Ministerial Sub-Committee on the CSME.

Mottley said the signing of the protocol on Contingent Rights was the first initiative in that regard, saying “no one in the Caribbean will move easily, without understanding what will be the implications for their spouses, their dependent parents or their children”.

She explained that it is, in this “real way, we have made a definable difference to our people.

“Similarly, those amongst us, in our region, who are committed towards expanding their enterprises, now have the opportunity to see that they can bid for government contracts, over a certain threshold, with respect to the protocol on Government Procurement that we are hoping to put in place, by the next heads of government meeting, for signature.”

Mottley said that the fact that the Council of Ministers of Finance and Planning (COFAP) has met twice in the last four months, having not met for the last five years, “is also a signal of our intention to be serious about the region’s business”.

At least six CARICOM prime ministers are attending the one-day prime ministerial meeting, here, and the CARICOM Secretariat said that it will focus on stakeholders’ perspectives and recommendations for an effective CSME, including objectives and priorities; free movement of persons; the role of the private sector and labour; as well as public awareness/education programs.

“They will also seek to address some macro-economic support measures, namely a review of the establishment of the enabling support measures for a competitive CSME, and some priority elements; specific key considerations for CSME effectiveness; consultation mechanisms; establishment of a single jurisdiction and single registration for companies; and the definition of a CARICOM national,” it added.

Prime Minister Mottley, who has lead responsibility for the CSME under the quasi-CARICOM cabinet, said the meeting has a number of issues that require “our urgent attention”.

“Some have been identified, some are in process and some are to be out, back fully on the agenda,” she said, referring specifically to the need for the region “to make life easier for those of our citizens…who want to move between our countries and who want to do so, without having to re-register and pay significant sums of money in each territory in order to do business.

“It is a matter that we believe can easily be remedied and it is one that will make that definable difference in a direct way to those, who are citizens doing business, in each of our territories,” she said, adding “we remain committed, even as we do all of this and even as we meet as heads in Port of Spain, later this year, to being able to identify how best we can reach the single market, in single domestic space, in transport, and the single domestic space in communications”.

Earlier, CARICOM Secretary General, Irwin La Rocque, said that the COFAP meeting had agreed to a timeframe to implement a number of elements of the single economy that would enhance the effective use and operation of the single market.

La Rocque said that the Prime Ministerial Sub-Committee is an important body, which provides political oversight and strategic direction to advance the CSME, recalling at the last CARICOM Summit, in Montego Bay, Jamaica, the leaders agreed that there should be more frequent meetings of the sub-committee, in recognition of the need for more intense focus on the CSME.

“These more regular sessions will keep the developments and progress under review and seek to address the challenges on an ongoing basis. It is also a clear signal from the Community’s leadership of their commitment to make the CSME more effective,” he added.

La Rocque said that stakeholders continue to believe that the CSME remains the best viable option and platform to achieve the goal of sustainable development for the region.

“They urged that there be more engagement with them, as beneficiaries of the measures, in order to gauge the progress and iron out the difficulties, in exercising their rights and accepting their obligations under the various regimes.

“We must, therefore, put in place a system of consultations, at both the national and regional levels, to involve the private sector, labour, the youth and other stakeholders, more intimately, in the process. This would make for more effective decision making and implementation, while creating the feeling that we are all in this together.”

La Rocque said that an important aspect of moving the process forward is the need for Member States to make every effort to implement the agreed commitments and obligations.

“The approved implementation plan sets out time frames for so doing, in the short, medium and long terms. The efforts to fulfil those requirements will be a significant and positive signal that we mean business,” he added.