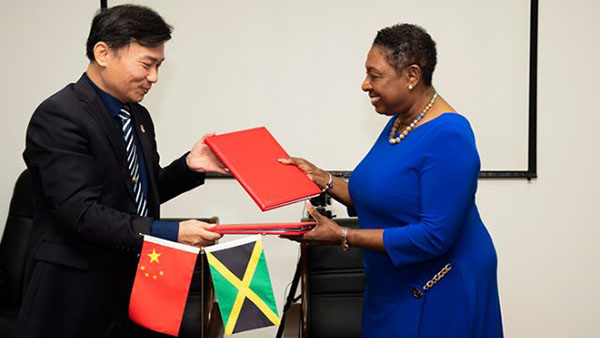 BEIJING, China September 5, 2018 — Jamaica’s Minister of Culture, Gender, Entertainment and Sport, Olivia Grange, has described the sports cooperation agreement, which she signed in the Chinese capital, last Friday, as “historic and extremely beneficial”.

Minister Grange and the General Manager of China Sport International Company (the state-owned sports cooperation agency), Lu Guoguang, officially signed the agreement, which will see more than 400 Jamaican athletes travelling to China for training, over the next three years.

The Sports Minister said it was the first time that so many Jamaican athletes would benefit, directly, from a bilateral sports cooperation agreement.

“Our athletes have natural abilities, but need assistance, and the government of Jamaica can only do so much. We sincerely thank you for the current project and we believe that the benefits are of tremendous value to our athletes,” said the Minister.

Although the signing of the document took place only last Friday, implementation of the program began in January of this year, when a contingent of Chinese coaches and administrators arrived in Jamaica to assess certain national teams, collaborate with local coaches and administrators, and prepare for the first batch of 138 Jamaican athletes and coaches to arrive in China.

Lu (speaking through an interpreter) said the Jamaican athletes made tremendous strides during training.

“In the two months, we have made great improvement.  The first (main) improvement is the record of your athletes and in the two months together, the athletes from Jamaica and China live, eat and train together and have built a great relationship between each other,” he revealed.

Ahead of signing the agreement, in Beijing, Minister Grange travelled to some of the training centres in the cities of the Changsha and Kunming, to observe the facilities, receive progress reports on the athletes from their Jamaican coaches and Chinese trainers, and to hear from the athletes their impression of the program. They all reported that the first year of the program has been a success.

“I’m happy to see firsthand the vast improvement in the skill level of our athletes and to tour the facilities. Our athletes have now been exposed to world class training facilities and to world class coaching, and we will make sure that your investment is not wasted,” Minister Grange said.

“We want to ensure that the infrastructure is in place for them to do well, when they return to Jamaica, and so we want to look at the development of our national stadium, for example.”

Under the agreement, the Chinese government will also donate equipment to the seven sporting disciplines. The equipment is to arrive in Jamaica this year.