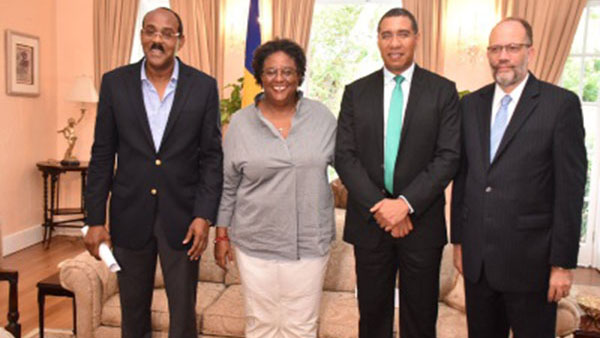 BRIDGETOWN, Barbados, September 6, 2018 (CMC) – Caribbean Community (CARICOM) leaders and their finance ministers ended two days of discussions, here, on Wednesday night, confident that they are laying the groundwork for a renewed energy in establishing a practical regional integration movement.

CARICOM chairman and Jamaica’s Prime Minister, Andrew Holness, speaking to reporters after the ninth meeting of the Prime Ministerial Sub-Committee on the CARICOM Single Market and Economy (CSME) and the Council of Ministers of Finance and Planning (COFAP), said he wanted to give the regional population the assurance that the integration movement was indeed moving forward.

He said he is aware that some may question the viability “or the purpose even, of CARICOM. But I think all our citizens can rest assured that the CARICOM institutions are working, are functioning”.

He said to have both the Prime Ministerial Sub Committee meeting and the COFAP taking place, here, “is a significant achievement, seeing that they have not met in a very long time, so critical issues that would move the Community forward, were not addressed.

“Our citizens, our voters and electors can rest assured that, as leaders, we are addressing those issues that are important to them and are practical and achievable, and we are using our energy to good effect,” Holness said, adding “there is indeed….a renewed energy and, I dare say, passion for a more practical form of integration that will move our entire region and to collaborate on mutual challenges and I believe that augurs well for everyone”.

She said there was agreement on the establishment of a single registration for companies across the region, adding “we believe that this is necessary to boost investments and to reduce both the hurdles and the costs that many of our enterprises will face, as they seek to do business, across multiple jurisdictions”.

The CSME allows for the free movement of skills, labour, goods and services across the 15-member grouping, and Mottley said the meeting had also agreed on the principle of mutual recognition, with respect to companies incorporated in one member state being recognised in another member state.

She said the meeting also decided to recommend to CARICOM leaders the need to expand the number of categories of workers allowed to work, freely, within the region.

“Right now there are 10 categories and we have agreed to recommend an 11th category of agricultural workers, primarily because we recognise the importance of being able to attain food security across the region, particularly in these difficult and turbulent times; and coming as we did last year, after the realisation of what the climate can do, what hurricanes can do and now we see earthquakes, to disrupt the whole production and distribution cycle”.

She said that the region is conscious and sensitive to the fact “that we have to be able to move the region closer to a level of food security, in ways that we have not perhaps been as assiduous about doing in recent times.”’

Mottley said that the meeting also recommended that the regional leaders also examine the establishment of a center to deal with the shortage of legal draftsmen and “to that extent, if we can pool our resources to be able to have model laws and to be able to look at reform of laws in social and economic sectors, in a way that, at the national level, we are constrained to do.

“We also agreed to look at the importance of adhering to the implementation plans for the single market and the single economy, and we literally have outlined the measures to be taken for further advancing it, in the short, medium and long term”.

Mottley, who has lead responsibility for the CSME within the CARICOM-quasi Cabinet, said in that context, regional countries have been asked to provide regular updates “and we have agreed that as Chair, we will work with heads and countries to be able to see where we can bridge the gap to ensure that progress is made in a seamless way”.

Mottley said that the new impetus for moving the CSME forward can be traced back to the CARICOM summit, held in Montego Bay, Jamaica, last July.

She said that it is also critical that the regional private sector, labour and non-governmental organisations be included in the new thrust, saying that regional leaders are being urged to consider a recommendation that the encounters with these organisations, “be a permanent feature of our own meetings…because we recognise that making a success of the regional integration process is not about governments alone”.

Earlier, Antigua and Barbuda Prime Minister, Gaston Browne, who chaired the COFAP meeting, told reporters that there is a renewed commitment to the integration process.

He said the COFAP meeting discussed the regional framework for a deposit insurance system, “which will establish a level of protection for depositors against losses due to the failure of financial institutions.

“The conference urged the urgent implementation by the Council for Finance and Planning for the Caribbean Community and this is especially important considering the failures of BAICO, CLICO and other financial institutions within the region…”

Browne said having this type of protection is “absolutely important”, adding that discussions were also held on a Community investment policy and an investment code, an incentive regime, an integrated capital market.

“We also agreed that the finalisation of the CARICOM Financial Services agreement should be expedited. These actions will strengthen the regional financial stability mechanisms,” he said, adding that the COFAP also approved, in principle, the objectives of the CARICOM credit reporting policy, “which among other things, provides for the regulation of the operations of credit bureaus and cross border exchange of credit information within the Community”.

Browne described this as a “very important initiative”, which he said will promote financial inclusion for CARICOM nationals, as they live and work across the 15-member grouping.

“Evidently it will facilitate greater accessibility to credit and, at the same time, ensure that there is more borrowing to support increased economic growth and development, and to create opportunities for our people (and) encourage greater entrepreneurship across the CARICOM space.”

Regarding the policies of the developed countries including the European Union to graduate some regional countries making it difficult for them to obtain concessionary loans as well as labelling them tax havens, Browne said “this issue remains a…threat to the region

“And we are seeking to dialogue with the various bodies within the EU…obviously at the top political level so that they can understand the consequences of their actions…that are now impacting on the region, especially in the context of the proposed sanctions and the blacklisting.

“So this is an issue we are monitoring, very closely, and we are hoping that there will be certain interventions made, within the next 30 days, that, hopefully, will bring some relief to the various countries within the region,” Prime Minister Browne said.