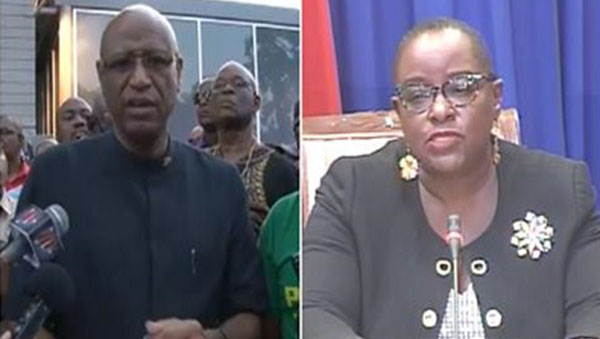 PORT OF SPAIN, Trinidad and Tobago, September 6, 2018 (CMC) – The Trinidad and Tobago government, today, maintained its position to close the oil refinery of the state-owned oil company, PETROTRIN, as trade union leaders vowed to shut down the country, on Friday, in protest at the decision.

Planning and Development Minister, Camille Robinson-Regis, speaking to reporters, after a two-hour meeting, between government and the union leaders, said “we have agreed to disagree” on the closure of the refinery.

But President of the Joint Trade Union Movement (JTUM), Ancel Roget, who is also the President of the powerful Oilfield Workers Trade Union (OWTU), told reporters at a separate news conference, that Friday’s call for workers to stay home and reflect on the current socio-economic situation in the country, “is on now more than ever”.

He accused the Keith Rowley administration of mismanaging the country since it came to power, three years ago, and insisted that the government was secretly moving ahead with plans to sell their oil refinery plant to “its friends”.

However, Robinson-Regis, who was flanked by two ministers, including Energy Minister Franklin Khan, reiterated that the government was not prepared to continue losing billions of dollars in keeping the plant operational, adding “we have reached the point where we can no longer continue”.

Prime Minister Rowley announced, on Sunday, that his administration is prepared to give the first option to the Oilfield Workers Trade Union (OWTU) to acquire the refining assets of PETROTRIN, telling the nation that the “decision to close the refinery was taken after detailed analysis and deep introspection”.

But the OWTU has since rejected the offer and said it was merely a “ruse” for the government to sell the refinery to a preferred buyer.

Rowley recalled that in January 2017, he had warned the nation about the financial situation, existing at PETROTRIN, and the need to deal with the situation.

“I reminded you that there is a US$850 million bond that is coming due for payment in the form of a single payment in August 2019, and another, of almost US$700 million, that would be due soon after,” Rowley said, adding that the future of the company “has been the subject of much negative speculation for the past several months, but inevitably, we must come to the time of decision making, as we are forced to abandon the procrastination and finger pointing, which have only served to worsen the eventual outcome”.

Rowley said that approximately 1, 700 permanent workers will be affected in the refining and marketing division of the company, while in exploration and production, employment levels are to be reduced from 1700 workers to approximately 800 persons.

“A large number of these workers, those over 50, may be able to exit by way of attractive early retirement packages,” he said, adding that in the coming weeks the government will take part in the announcement and participation in at least two significant industrial projects in the southwestern peninsula.

Robinson-Regis told reporters that the main agenda at today’s meeting was the issue of PETROTRIN, adding “that at the end of the meeting, the decision was that we have agreed to disagree.

“The government has been very clear in its analysis of what has taken place at PETROTRIN. What we have said in the meeting and what we have continuously said, is that the issue, which is before us, is the closure of the refinery.

“PETROTRIN, as an entity, is existing but the refinery is what that has been found to be the problematic issue for the government of Trinidad and Tobago,” she said adding “we have reiterated the point on more than one occasion that the refinery is a loss-making entity”.

She said what the analysis has shown is that “where we should be heading is ensuring that exploration and production …are the areas where we will find the best solution for dealing with what is taking place at PETROTRIN at this time”.

She quoted Prime Minister Rowley as saying that what is necessary now is “finding the best way forward for the workers”, in terms of compensation as well as the frontline communities as a result of the closure of the refinery.

But Roget told reporters that his union has “consistently maintained the position that the company ought to be restructured, urgently, and made profitable.

“So that’s our position all of the time and we made that position known to the prime minister, on yet another occasion, that long before they came into office, the OWTU was insisting, with a great sense of urgency,  that the company ought to be restructured.

“Since we came to a place, with a common approach, to approach this thing in an amicable way that we should divide the company into four operational areas, and that we should sit down with the board and hammer out what is required for each area, and how we can make each area viable and, in the end, make PETROTRIN return to viability and profitability, we were not given the opportunity”.

Roget said his union was not insisting that “our proposal is the best proposal in the world. But we are saying that the world would have lost an opportunity if they did not get the opportunity for them to sit down and to look carefully at what our proposal contained”.

He said Prime Minister Rowley maintained his position that “we have to operate without a refinery …and as a consequence, send workers home”.