New in Pride
Home / International News / Demonstrators And St. Lucian Mother Demand That White Police Officer, Who Shot Her Son In Texas, Be “Locked Up” 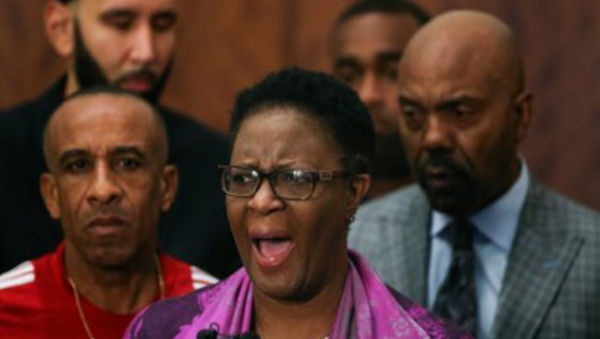 Demonstrators And St. Lucian Mother Demand That White Police Officer, Who Shot Her Son In Texas, Be “Locked Up”

DALLAS, Texas September 17, 2018 (CMC) – Demonstrators, on Friday night, demanded that a white police officer, Amber Guyger, who shot and killed a 26-year-old St. Lucian national in his apartment, last week, be “locked up”, as the relatives of the victim demanded that she be fired from the Dallas Police Department.

Guyger, 30, who has been charged with manslaughter, told police she went to the wrong floor, on the night of September 6, and, mistaking Botham Jean’s apartment for her own, shot and killed him, believing he was a burglar.

Jean was buried, last Thursday, and the demonstrators were upset at information, released by the police, showing that a small quantity of marijuana had been found in his apartment.

The protestors marched through downtown Dallas chanting “lock her up,” and holding up traffic, a short distance from South Side Flats, where both the white police officer and Jean lived, in separate apartments.

The protestors were also aggrieved at what they said were the media coverage and the injustice being perpetrated by the authorities.

At a news conference, on Friday, Jean’s mother, Allison Jean, a former senior public servant in her homeland, St. Lucia, called for justice for her son.

“Give me justice for my son, because he does not deserve what he got. I will not sit back and see that justice does not prevail,” she said, as she also denounced law enforcement for releasing a public document, Thursday, that showed 10.4 grams of marijuana was among the items found in her son’s apartment.

She said that the authorities were now trying to stain her son’s character and that the information released is, to me, worse than the call that I got on the morning of Friday, September 7.

“To have my son smeared in such a way, I think shows that the persons, who are really nasty, who are really dirty, are going to cover up for the devil, Amber Guyger,” she said.

Attorneys for Jean’s family said that Dallas police obtained a search warrant for Jean’s apartment, so they could use the marijuana to smear his character.

“Twenty-six years without a blemish and it took being murdered, by a white Dallas police officer, in his own home, to make Botham Jean a criminal,” civil rights attorney, Lee Merritt, said.

Jean said she also wanted to know whether Guyger’s apartment and car were searched. Guyger’s blood was taken by investigators and Allison Jean demanded the results be made public.

“I’m calling on the Dallas officials, please come clean. Give me justice for my son,” she pleaded.