The Public Security Ministry has revealed that a fake police Facebook page "has recently released inaccurate information about Minister, Khemraj Ramjattan (pictured), adding that “the information provided on the page, seeks to cause mischief and confusion".

GEORGETOWN, Guyana, September 17, 2018 (CMC) – The annual training conference of the Customs Anti-Narcotics Unit (CANU) began here, today, amid concerns of the use of illegal drugs in the country.

Public Security Minister, Khemraj Ramjattan, said he was also concerned at the use of drugs in schools, and urged parents to be in the forefront of the fight against illegal drugs.

“I am not interfering with family life. I am pleading with people — be a little bit more caring to your children; see what they do and do not d, and that will help them, or prevent them, from ecstasy and all these things. When they go to a party, what are they doing? Are they having ecstasy with other friends and family members?” he asked.

“We are conscious of the increasing demand for ecstasy among our youth population, including children at schools.

“This drug now seems to be the common narcotic that is readily available at many night clubs and parties,” Ramlall told the conference. 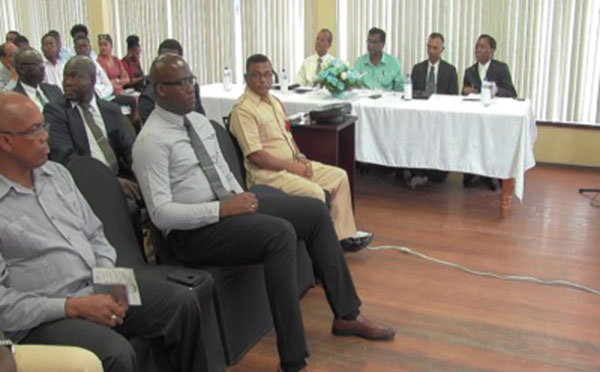 Figures show that for the first eight months of this year, CANU seized 104 grams of heroin and 100 grams of crystal methamphetamine. CANU said it also seized 660 grams of marijuana and 870 grams of cocaine, during the same period

“While most of our seizures would have indicated that cannabis and cocaine are the dominant narcotics seized, I urge you to take serious note of the synthetic drugs, such as heroin, ecstasy and crystal methamphetamine, all of which were seized by the unit in 2018. This is certainly a new trend and a very worrying one for Guyana,” Ramlall said.

“However, while we are delighted about the collaborative efforts thus far, we are also weary of the fact that there is a definite need for much more to be done, so as to ensure that no efforts are spared in dismantling networks and the resources of narcotics dealers and their associates.”

In his address, Ramjattan reminded the CANU agents of the importance of their jobs and the need for more professionalism and integrity.

“In the process of continuing, expanding more and more the amount of people that are going to be trained at this annual staff training, in which a number of very very important topics are going to be dealt with, moral ethics, integrity and professionalism is number one that I see on the list, and one of which I had spoken to Mr. Leslie Ramlall about, that I want emphasized.”

He said moral ethics, integrity and professionalism are among the 15 topics to be examined, during the five-day conference.

The Public Security Minister compared the global illegal narcotics trade to the management of large corporations, adding that the drug trafficking industry has a ripple effect on other criminal activities, like trafficking in persons, counterfeiting and even “gun running.”

“And I want you, as officers in training, to don’t feel that the other man going to bat for you, and that you going to do mischief at the corner. No! Everybody got to go out there and do it. And that is what is called professionalism, and I want that professionalism to breathe integrity. Look, this job here, is a tough one, it ain’t easy”, Ramjattan said.