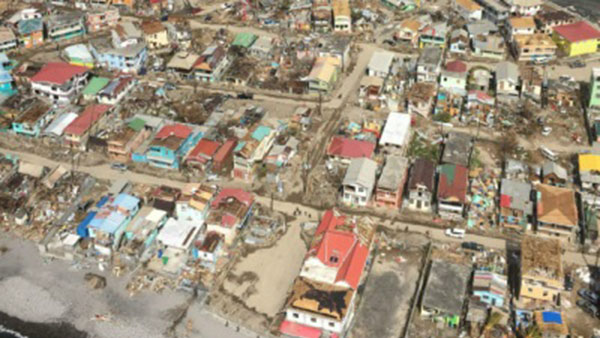 Aerial view of some of the damage caused by Hurricane Maria. Photo credit: CMC.

ROSEAU, Dominica, September 18, 2018 (CMC) – Dominica is observing the first anniversary of the devastation, caused by Hurricane Maria, last September, that killed at least 30 people, with Prime Minister Roosevelt Skerrit praising God and insisting that “considerable progress” had been made in the rehabilitation exercise.

”There are some positive signs, obviously there are challenges. You will always have challenges far more, after a Category 5 hurricane that impacted every facet of our society,” Prime Minister Skerrit said.

“All things considered, we have done well, based on what independent observers are saying. They, too, have recognised the efforts that we have made, and one has to appreciate too (that) a lot of what we have been able to do thus far…have been done utilising our own resources,” Skerrit said on the state-owned DBS radio, today.

On September 18, last year, Hurricane Maria, packing winds in excess of 160 miles per hour, slammed into the Caribbean island, as it made its way through the Lesser Antilles, leaving 30 dead, another 30 missing and damage estimated at millions of dollars.

Skerrit said that “all things considered, we have made considerable progress.

“We have signed contacts for several hundreds of housing units…constructed and under construction,” he said, adding that the island has also resumed exporting agricultural produce to overseas markets.

“Business activity in Dominica is largely back to normal, so one can say there has been tremendous progress, and we have been able to mobilise the international and regional communities to our assistance and their commitments to significant sums of funds to assist in building the world’s first climate resilient nation,” Skerrit added.

He told the nation that there has also been tremendous progress within the tourism industry, with many hotels under construction continuing apace and others expanding their properties.

Some people, who were interviewed by DBS radio, said they were pleased with the progress being made, one year later, with many praising God for saving their lives.