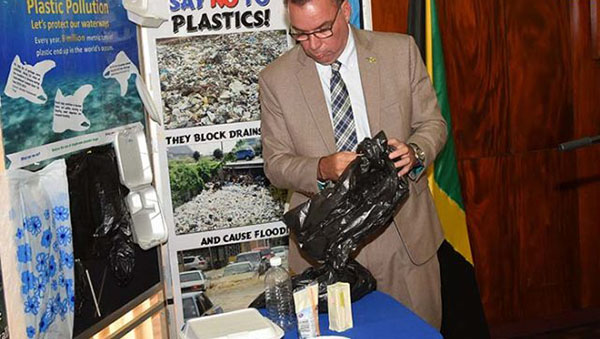 Minister without Portfolio in the Ministry of Economic Growth and Job Creation, Daryl Vaz, looks at some of the plastic products that the government will ban starting January 2019. The Minister announced a ban on the importation, manufacturing, distribution and use of specific categories of plastics during a press conference at Jamaica House, on Monday (September 17). These items include single-use plastic carrier/shopping bags; expanded polystyrene foam, commonly referred to as styrofoam; and plastic drinking straws. Photo credit: Rudranath Fraser/JIS.

Antigua and Barbuda, St. Lucia, Dominica, Trinidad and Tobago, Grenada and St. Vincent and the Grenadines are among CARICOM countries that have, either announced a ban or have indicated that the ban will come into effect in 2019.

The Jamaica government said that the ban on single-use plastic bags and straws, as well as Styrofoam, goes into effect from January 1, next year.

“There will be a ban on the importation, manufacturing, distribution, and use of all single-use plastic carrier bags, commonly called scandal bags. The ban applies to bans with dimensions at, or below, 24 inches by 24 inches. The ban excludes single-use plastic bags, utilised to maintain public health or food safety standards, such as those used to package raw meats, flour, rice, sugar and baked goods, such as bread,” Minister without portfolio in the Ministry of Economic Growth and Job Creation (MEGJC), Daryl Vaz, told a news conference.

He said that manufacturers and importers of shopping bags, made of polyethylene, must apply to the National Environment and Planning Agency (NEPA) for limited exemptions. These applications will be considered, on a case-by-case basis, for continued manufacture and importation, no later than January 1, 2021.

It said that the local manufacture and distribution of polystyrene foam, for use as finished goods in the food and beverage industry, will be banned as at January 1, 2021.

“The use of polystyrene for the packaging of food items, such as raw meats, will be exempt. Producers of products, which utilise such packaging must apply to NEPA for limited exemptions.  Industry is encouraged to manufacture/distribute paper-based and other environmentally-friendly alternatives for the domestic market,” Vaz said.

He added that there will be a ban on the import and manufacture of plastic drinking straws.

But there will be no ban on wax-lined paper straws or other non-plastic straws.

“The importation of straws, attached to lunch juice boxes and drink pouches, will be banned as at January 1, 2021. This deadline was arrived at, based on the government’s discussions with the private sector, regarding the timeframe for the conversion of existing equipment.

“For the medical sector, as well as persons with disabilities, drinking straws made from alternative materials, such as paper or bamboo, are not always suitable. In light of this, exemptions will be examined, in consultation with key stakeholders. Applications for such exemptions should be applied for, through the NEPA.,” the government said.