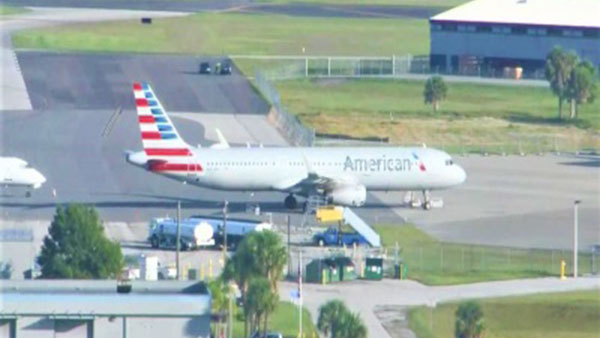 ORLANDO, Florida, September 20, 2018 (CMC) – A Trinidad and Tobago national, who entered the United States from Canada, was arrested, today, after he jumped a security fence at Florida’s Orlando Melbourne International Airport and boarded a passenger jet.

Airport authorities said that the student pilot boarded the aircraft that was undergoing maintenance at the time.

They said the suspect, who has a Florida driver’s license, parked his vehicle, climbed a fence, ran across the tarmac and got into the American Airlines Airbus A321.

“There obviously seemed to be planning involved,” said spokeswoman, Lori Booker, at a news conference.

She said the 26-year-old man parked his car, curbside, with the engine still on, jumped a fence and boarded an American Airlines plane that was out of service. Booker said an airport worker saw the man get on the plane, and called police.

Airport police arrived on the scene, within minutes, and apprehended the man.

Melbourne police have since taken him into custody, and the car was placed on a flatbed truck and towed away.

All flights were suspended, while authorities conducted a security sweep of the airport. The airport has since re-opened. Booker said only two flights were affected.

“We are now a fully functioning airport. We believe, in this instance, our security worked just fine,” she told reporters.

The Trinidadian was a part-time student at the Florida Institute of Technology in Melbourne, where he studied aviation management and had completed some flight training, school spokesman, Adam Lowenstein, said.

The university is cooperating with authorities, he said, declining to provide the suspect’s name.