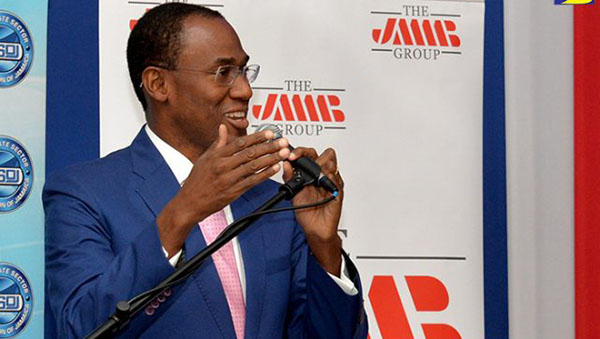 KINGSTON, Jamaica, September 21, 2018 (CMC) – Finance and the Public Service Minister, Dr Nigel Clarke, says Jamaica must remain focused on further debt reduction and maintaining fiscal credibility, over the long term, in order to avoid a reverse of the gains in these areas.

“We cannot afford to stop there. We must continue on the path of reducing our debt until we get to our objective of 60 percent of GDP by 2025,” Clarke said, as he addressed the Private Sector Organisation of Jamaica’s (PSOJ) annual economic forum, yesterday.

Clarke said that Jamaica has made significant progress in reducing its debt from 147 percent of gross domestic product (GDP), and is projected to fall below 100 percent by the end of the current fiscal year, in March 2019.

He said while Jamaica now stands out as the “star performer” among Caribbean economies, based on developments in several other states, “it’s shocking how quickly… [the] fortunes [recorded] can be reversed”.

“Countries that we would have held up as role models… based on their operations and infrastructure, have, overnight, transformed to countries on the edge… and we should observe that with a strong dose of humility, which should serve to remind us of the connection between [economic] resilience and debt,” he said.

Clarke said the government’s quest to reduce the debt ratio to 60 percent of GDP, requires the collaborative input of the private sector to ensure that this goal is achieved.

“That is why the government will seek to further institutionalise economic resilience, [and] the path towards economic independence, by strengthening our fiscal responsibility framework with the establishment of a Fiscal Council,” he noted.

Clarke said that Jamaica’s fiscal rules were legislated in 2010 and strengthened in 2014, whereby a fiscal balance is prescribed on an annual basis and, based on the prevailing economic variables; all parameters are geared towards achieving the 60 percent debt-to-GDP ratio.

“The Fiscal Council will simply be the guardian and interpreter of those fiscal rules, which already exist, and will help us to remain on this debt-reduction path,” Clarke said.

Meanwhile, Dr Nigel Clarke says the government is drafting a Public Financial Management for Disaster Risk Policy and Framework, for submission to Cabinet.

He told the PSOJ conference that the policy aims to strengthen Jamaica’s response to natural disasters, through a streamlined national approach, that will, as best as possible, facilitate the availability of dedicated resources for recovery.

Clarke said that the policy will be tabled in Parliament, following Cabinet’s deliberations, and emphasised that the government wants to “ensure that we have consensus (through a national approach), because natural disasters affect us all”.

He said that Jamaica and other Caribbean countries are vulnerable to natural disasters, citing Sunday’s 4.6 magnitude earthquake that shook sections of the island.

Clarke said data from the Association of Caribbean States (ACS) show that the Caribbean recorded 165 natural disasters, between 1990 and 2008, “and as we know from our experience… natural disasters result in unplanned expenditure”.

Noting that events, like Hurricane Gilbert, which devastated the island in 1988, “only occur, once every several decades”, the minister said data and experience show that they “cost [countries like] Jamaica tremendously”.