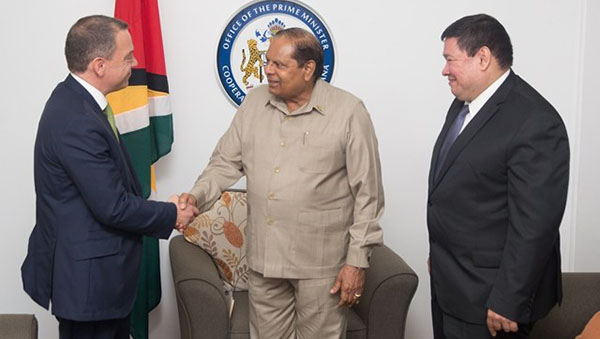 Guyana To Benefit From Mexico’s Oil And Gas Experience

On Wednesday, Regules along with Mexican Ambassador to Guyana, Ivan Robero Sierra Medel, paid a courtesy call to Prime Minister, Moses Nagamootoo, where the topic was discussed.

The ASEA director stated that while Mexico has been an oil producer for over a century, three years ago, the industry underwent reform. He explained that “institutions, environmental regulations and safety regulations” had to be designed and put into place.

Regules noted that “in a way, it is a similar situation to what Guyana is experiencing at this time, the country is facing a very promising future with oil and gas,” adding that the question is “you harness this future in order to make it sustainable and a positive future”.

Collaborating with the Inter-American Development Bank, Regules is currently spearheading a team, which is conducting a three-day workshop, where representatives from the Environmental Protection Agency (EPA), Ministry of the Presidency, Ministry of Natural Resources and other organizations, with an interest in the oil and gas industry, are being engaged.

The director emphasized that Mexico’s “recent experience can be of value to Guyana, in deciding how to better harness this oil and gas industry, to make it a positive thing for the country.”

He also expressed interest in hosting future workshops to continue the conversation.

Nagamootoo expressed his gratitude towards the ASEA Director, while noting that the training sessions are a result of discussions between both governments in 2015.