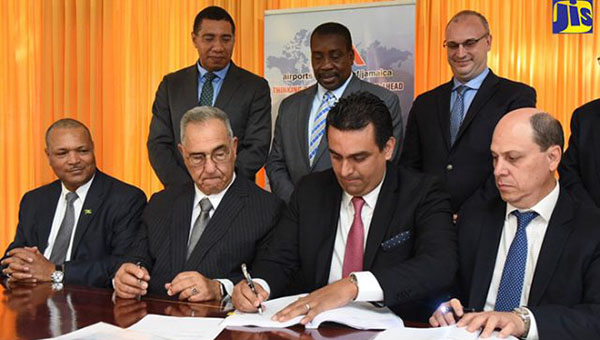 A 25-year concession agreement was signed, yesterday, by William Shagoury, Chairman of the Airports Authority of Jamaica (AAJ), which owns the NMIA.

Under the agreement, GAP will be responsible for improving the airport’s land and air operational efficiency, and financing and completing a modernisation program, at an estimated cost of over US$110 million.

Additionally, the government will receive a guaranteed percentage of the airport’s gross revenues. The entity has the option to extend the arrangements by an additional five years.

GAP emerged the preferred of three bidders, which included two consortia of foreign and local investors.

Their selection followed the public opening and evaluation and Cabinet’s subsequent approval, in September, of the three bid submissions, received by the Development Bank of Jamaica (DBJ) in July.

The transaction value for GAP’s bid totals over US$2 billion.

Holness said the transaction represents another successful public-private partnership (PPP) deal, coming on the heels of similar arrangements with the Kingston Container Terminal and North-South Highway.

“The successful outcome of this public-private partnership attests to the transparency and equity of the process, as well as the professionalism, accountability and integrity of all stakeholders involved,” he said.

Holness argued that this type of investment modality is critical to the government’s economic growth strategy, adding that “it is evident that PPPs are excellent vehicles for unlocking the value of assets, reducing debt and mobilising local and foreign investment in our economy.”

In his remarks, Montague noted that NMIA has played a critical role in Jamaica’s economic development for many years.

He said the aviation sector’s critical role to tourism and the services sector “made clear the need for [the] modernisation and development of our airports”.

“Through a thorough analysis, the government decided that privatisation was the best available option for mobilising the considerable resources that would be required to achieve our objective,” the minister noted.

Montague said the transfer of financing and operational responsibilities to GAP now enables the AAJ to focus on managing the concessions at NMIA and the Sangster International Airport in Montego Bay, which the Mexican entity manages through subsidiary company, Desarollo de Concesiones Aeroportuaris.

For his part, Raul Revuelta Musalem, Chief Executive Officer of GAP, said the company welcomed the opportunity, afforded to manage the NMIA’s operations.

“You can be assured that the group I represent will contribute to the achievement of Jamaica’s Vision 2030 [of] transforming the country into the place of choice to live, work, raise families, and do business,” he added.

GAP has concession management agreements, some totalling 50 years, for 13 airports in Mexico.

The entity has been managing the operations of the Sangster International Airport, in the western city of Montego Bay, since 2003.