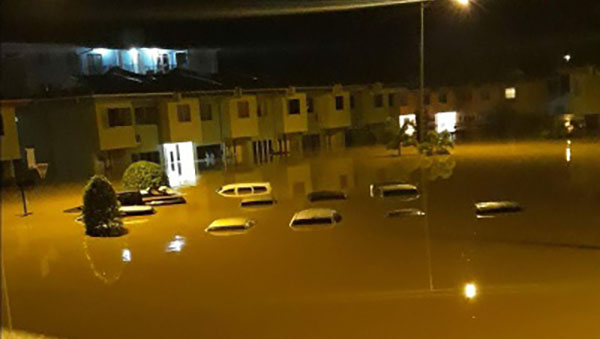 Flooding in La Horquetta, along the east-west corridor, in Trinidad and Tobago.

PORT OF SPAIN, Trinidad and Tobago, October 20, 2018 (CMC) – The Trinidad and Tobago government, yesterday, said teams were working to rescue people, trapped by floods and landslides, caused by heavy rains, here, over the past 48 hours, and that the full extent of the damage caused, will be revealed as the water subsides, in the coming days.

“This is a national disaster, the flooding is quite widespread and quite severe, and it is going to cost a lot of money to bring relief to people, who have been affected. Notwithstanding whatever shortages we are experiencing, we will have to find the resources to help,” Prime Minister, Dr. Keith Rowley, said after touring some of the affected areas.

Trinidad and Tobago’s Meteorological Service (Met Office) said that an active Inter-tropical Convergence Zone (ITCZ) continues to produce periods of rain, showers and thunderstorm activity, which can lead to flash or riverine flooding, as well as landslides and landslips in areas so prone. Gusty winds can be experienced in the vicinity of heavy downpours.

Many parts of the country were flooded and there have been widespread reports of landslides and road blocks, caused as a result.

While there have so far been no reports of deaths or injuries, the Met Office has issued a “Red Riverine Flood Alert” warning persons to take all precautions to protect life and property.

“Riverine flooding occurs when water levels in a river over-tops its banks and spills into surrounding areas. This type of flooding is more widespread and usually lasts for several days,” the Met Office said, adding that currently, river levels have exceeded threshold levels and some have already over-spilled their banks.

In a statement, early yesterday, Prime Minister Rowley said that he had been receiving “timely updates” from the relevant government agencies responsible for spearheading the ongoing rescue operations as well as those coordinating relief efforts in the communities affected by severe flooding.

He said “throughout the night and into this morning the men and women of our protective services and the various Regional Corporations have been working diligently on the ground to respond to this disaster”.

Rowley said that members of the Coast Guard and Defence Force are working to rescue those who are trapped, adding “for those of you who are still stranded I know that patience may be running thin but help is on the way”.

Rowley said that National Security Minister Stuart Young is mobilising with the Office of Disaster Preparedness and Management (ODPM) to conduct an aerial reconnaissance “so that we can better ascertain the scope of the intervention required.

“The Government through its respective agencies is working to ensure that much-needed resources reach those who require assistance. In the coming days the full extent of the damage will be revealed as the water subsides. Today there are families seeking shelter at community centers and schools,” Rowley said, urging citizens to ‘continue to remain vigilant and heed the warnings and alerts from the Office of Disaster Preparedness and Management and the Meteorological Office”.

The OPDM said that the adverse weather situation will continue until Sunday and urged motorists to seek alternative routes where possible and be extremely vigilant of rising flood waters.

“The ODPM appeals to all persons to take the necessary precautions to preserve life and property,” it said, adding that people should also desist from driving or walking through flood waters.

“Vehicles do not provide adequate protection from flood waters. Vehicles can be swept away or may stall in flood waters,” it said.