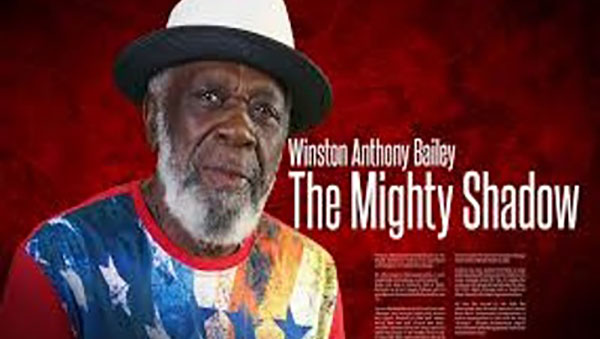 Winston Bailey, better known as 'the Mighty Shadow', was " an original in all his various musical creations", according to T&T Prime Minister, Dr. Keith Rowley.

PORT Of SPAIN, Trinidad and Tobago, October 23, 2018 (CMC) – Prime Minister, Dr. Keith Rowley, said, today, that Winston Bailey, better known as ‘the Mighty Shadow’, revolutionized the calypso world with his haunting sound and unique delivery, which he crafted and perfected in an impressive catalogue of work, spanning several decades.

Bailey died at the Eric Williams Hospital, east of here, during the early hours of Tuesday. He had been ailing for some time and had suffered a stroke on Sunday. He was 77 years old.

Rowley said that Bailey, who was due to have received an honorary Doctor of Letters degree from the St. Augustine campus of the University of the West Indies (UWI) this weekend, was “an original in all his various musical creations”.

“His music told us stories about ourselves, through poignant social commentary, which was often fused with wry humour. Over the years his contribution to the development of our local music earned him regional and international acclaim,” Rowley added.

“For many, his rendition of ‘I Believe’ will always define the class and talent of this superb performer and social commentator. We are honoured to have witnessed the life of this great musician, and to have experienced his outpourings of the best of our calypso culture. We are grateful for the music he gave us and proud of his legacy, which will remain undiminished for all time,” Rowley observed.

Opposition Leader, KamlaPersad Bissessar, said Bailey made an “indelible contribution to our music and culture and had a distinct style of his own”.

She said she was “saddened to learn of the passing of this creative spirit and humble soul, just a few weeks after he marked his 77th birthday.

“Our musicians, artists, writers must be honoured and treasured, and I continue to urge our young people to examine and seek inspiration from the works of our incredibly talented creatives. As we reflect on the life of this remarkable cultural icon, I leave you with the lyrics of one of his popular calypsoes, ‘Dingolay’:

“The one who invented music is got to be to terrific, got to be the one who created the sun and the trees, rivers and seas.

“Music fills the world with happiness, plenty sweetness and togetherness, music have no friends or enemies. Everybody could dingolay”.

The Trinidad and Tobago Unified Calypso Organisation (TUCO) described Shadow as one of the greatest lyricists of all times.

“On behalf of TUCO, I would like to extend our deepest condolences to the family. It is with a deep sense of grief and sadness that TUCO has to announce the passing of one of our greatest-ever lyrical geniuses in the art form of calypso,” said executive member, Steve Pascal, better known as Ras Kommanda.

“We have lost a father, a brother, an uncle, someone whom Trinidad and Tobago treasured and cannot be replaced. Shadow is one of the most unique individuals, dynamic performer. That is our Shakespeare,” he added.

Former Culture Minister and calypsonian, Winston “Gypsy” Peters, said that Shadow’s death comes, following that of pan maestro, Ken Professor Phillmore, and that Trinidad and Tobago has lost another icon.

“The country has lost an icon. This is a true icon. This is a man, who has given us creativity at its very best. Nobody could replace Shadow,” said Peters, who is now the Chairman of the National Carnival Commission.

He called on TUCO to ensure the memory of Shadow and other calypsonians live on for a very long time.