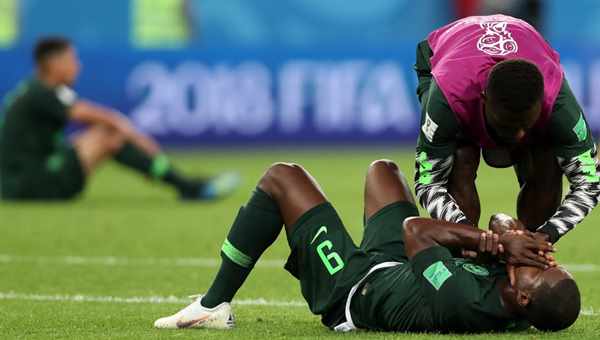 Nigeria’s players react after the loss to Argentina in the 2018 world cup. EPA-EFE/Tolga Bozoglu.

At every World Cup tournament since 1986, at least one team from Africa has made it to the second round of the World Cup finals. That record unceremoniously ended in Russia 2018, after all five countries – Egypt, Tunisia, Morocco, Nigeria and Senegal – were knocked out in the preliminary round.

There were high hopes as the quadrennial tournament started that Africa could build on its display in Brazil in 2014 when two teams – Nigeria and Algeria – reached the second round for the first time.

Instead, the African continent, and its soccer adoring fans are wondering how teams boasting of European based players, who play at the highest level could suffer 10 defeats, two draws and a mere three wins out of 15 games played in Russia?

Indeed one writer wondered whether the early elimination could be bad luck, or a lack of flair. But the circumstances characterising the exit of each of the African teams were in many respects quite unique.

Egypt
Egypt bounced back into the World Cup after a 28-year absence. A lot was expected from them given that they’ve won the African Cup of Nations a record seven times. The World Cup was ideal to demonstrate their prowess, first because they were in a manageable group and secondly, in Mohammed Salah, they had one of the world’s best players.

Salah’s injury on the eve of the tournament proved too costly to overcome and the rest of the players failed to raise their game to fill the void in the loss to Uruguay in the opening game. Note that Salah dominated Egypt’s campaign – ultimately scoring seven, and assisting two, of the 10 goals they scored both in qualifying and in Russia.

They returned home from Russia having lost all their three games.

Morocco
Morocco’s campaign started with a painful own goal in stoppage time of their opening game to gift Iran a 1-0 win. It was a huge and costly defensive error against a beatable opponent given that Portugal and Spain were coming up next on their schedule.

Indeed, Morocco competed impressively in all their matches. Against the European champions Portugal, the team impressed with their offensive approach, passing, and fluidity as they sought to equalise. But conceding goals either very early or late can cost a team heavily and Morocco were twice on the losing end.

The game that brought the best and worst in Morocco was their final game against Spain. The Atlas Lions came close to beating the 2010 World Champions but conceded, yet another stoppage-time goal to draw 2-2.

Morocco’s performance, like other African teams, raises questions about game tactics when leading or trailing or early and late phases of the game.

Nigeria
Nigeria showed promise given that they were the youngest team in the tournament featuring 18 players who had never played at a World Cup before. Unfortunately, this young squad learnt the hard way as they were just four minutes away from qualifying for the knockout rounds when Argentina scored a goal that knocked them out.

The BBC Sport quoted their coach, Gernot Rohr, saying: “I think the future is for Nigeria because there is a big solidarity – you saw in the difficult moments how great the spirit in the team is.”

But Nigeria paid the price for starting slowly in the tournament especially in the first match against Croatia. There’s hope if this young squad is sustained and nurtured into maturity.

Tunisia
Tunisia managed to beat Panama. But they were simply not good enough to progress from a difficult group featuring both Belgium and England. Captain Wahbi Khazri admitted that his side found the level against both top-drawer European opponents to be, too high, too elevated.

Like Egypt, Morocco and Nigeria, the Carthage Eagles lost their opening game to England in stoppage time. Next, Tunisia were mercilessly hammered by a hungry Belgium 5-2.

The only consolation is that Tunisia left the competition as Africa’s top scorers with five goals from three games and a sense of satisfaction after beating Panama.

Senegal
Ahead of the tournament I picked Nigeria and Senegal to do well. Senegal started on a high note when they beat Poland 2-1, raising hopes that they would shine.

But the dropped points against Japan in a 2-2 draw exposed their game management deficiencies while leading in a close game. The fact that they picked up unnecessary yellow cards in their first two games rendered them vulnerable against Colombia. Indeed, their tied points with Japan led to Japan progress because Japan had a better disciplinary record – four yellow cards while Senegal had six.

Hopes for next time
So why was Russia 2018 such a disaster for African teams? A great deal of hope was being placed on a few outstanding talents that were either injured or whose abilities did not blossom due to tactical limitations and tight marking by opposing teams.

It was also evident that African teams conceded goals either too early or very late. This speaks of inadequate game management skills on the side of the coaching crews.

It was also clear that most of the African players failed to raise their game to match the level expected at World Cup. But most conclusively is the fact that the teams were outmatched technically and tactically.

The teams never managed to score enough goals, while the defences conceded goals at crucial moments. It did not help that midfield play was also devoid of creative play.

Once more the continent has to wait for another shot in 2022. Preparations had better start in earnest if any breakthroughs are going to happen. One thing is clear, successful club careers for African players in Europe don’t necessarily translate into success for their home teams at World Cup level.

Wycliffe W. Njororai Simiyu is Professor, Health and Kinesiology at the University of Texas at Tyler.