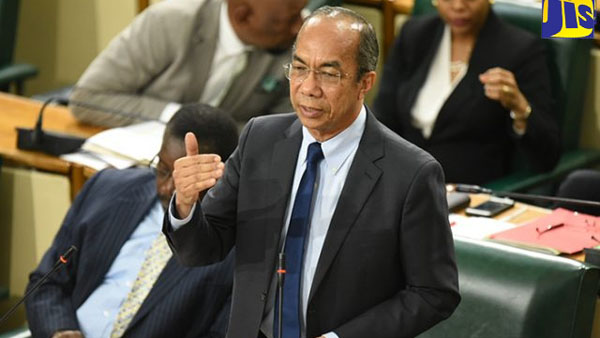 KINGSTON, Jamaica, October 31, 2018 (CMC) – The Jamaica government has described as “more heinous and barbaric”, crimes committed against women, children and the elderly, and appealed for an end to the “level of callousness in the souls of some of our citizens”.

National Security Minister, Dr. Horace Chang, told legislators that while there has been an overall 21 percent decline in the number of murders in the country, since the start of the year, there has, however, been a series of cruel attacks on vulnerable groups, particularly the elderly and young girls.

He said also, while there had been a 29 percent decline in the overall number of children murdered, however “when compared to last year, the attacks on these vulnerable groups appear to be more heinous and barbaric, and is cause for grave concern to the government”.

Chang said that so far, 38 children had been killed since the start of the year, with most of these crimes being done by persons the victims knew well, indicating “ a level of callousness in the souls of some of our citizens, that must be rooted out”.

He said that while these murders are carried out by “heartless murderers” and having a significant impact on loved ones, the government is aware of the need to “ensure that our best efforts are operationalized, at all times, to give optimal results and afford justice to our victims.

“In this regard…we continue to implement several responses, across various platforms, to enable a holistic response. This includes the government embarking on a number of relevant legislative pursuits, to strengthen the legal framework, to provide greater protection to our women, children and the elderly as well as to strengthen the legal authority to bring the perpetrators to justice,” Chang told legislators, yesterday.

He said it must be, that where offences are committed, we must have severe penalties that act as deterrents to these crimes; justice must be swift, sure and severe.

The National Security Minister said that a Joint Select Committee of Parliament has recently concluded deliberations on a suite of laws, namely the Sexual Offences Act, the Domestic Violence Act, the Child Care and Protection Act and the Offences Against the Person Act.

Chang observed that at the heart of this review, was the special emphasis, placed on the protection of the vulnerable – women, children, the elderly and persons living with disabilities — from violence and abuse.

He said that a number of submissions were made, by members of the public and various government and non-government organizations, to the Joint Select Committee, which is now compiling a report to be submitted to Parliament.

Chang said that while the government continues the renewed focus on the Jamaica Constabulary Force (JCF) and the process to reorganize and equip the police, over the next couple years, he wanted to re-assure the public that the government will continue its current drive to invest into initiatives, surrounding public safety.

He said the recently-launched Public Safety and Traffic Enforcement Branch (PSTEB) of the JCF is only but one of these initiatives.

“The work of this branch is the pursuit of order and security in our public spaces. The PSTEB along with the Community Safety and Security Branch, also of the JCF, will work to get into our communities to help in influencing behaviour change in our society.

Chang said that the Counter Terrorism and Organized Crime (CTOC) Branch and the Criminal Investigative Branch (CIB) with the support of the Major Organized Crime and Anti-Corruption Agency (MOCA), will bring increased focus to investigating these incidents, to identify and apprehend individuals, associated with these heinous acts.

He said these branches will work with the Center for Investigation of Sexual Offences and Child Abuse (CISOCA) that will be strengthened to adequately investigate crimes against these vulnerable groups.

“In addition to this, the Ministry has also expanded the scope of our existing partnership with Crime Stop, to include a special reward scheme, to improve investigations of murders of vulnerable individuals.”

Chang said he was urging Jamaicans to come forward and stand up for what is right.

“No one with information that could lead to the arrest of any criminal should remain silent. The police are depending on the cooperation of all Jamaicans to come forward, to assist us in this fight.”

The National Security Minister said that while the government does not say poverty is the cause of this wickedness, it is a reflection of a deeper malaise that has befallen the society.

“Violence against the vulnerable is depraved. But especially when it is against our children, must be contained and support and opportunities be provided for restoring self-worth and self-expression. This campaign will run in parallel to the Ministry’s social intervention strategies in several of our most volatile communities.

“The Ministry of National Security will secure our citizens, particularly the most vulnerable in our society. The safety of all citizens, the security of our public spaces and the protection of our borders remain the mandate of this Ministry.

“But I reiterate to this House and indeed the citizens of Jamaica, that our women and children, the disabled and the elderly must be protected, instead of assaulted and violated. We will lead in this charge and it will be executed by the Jamaica Constabulary Force,” Chang said, adding “this culture of violence must give way to peace and security in our Jamaican society. We must begin to value the sanctity of life and change our normalized attitude to disorder and violence”.

Chang said that in the past he has called the brutal acts of violence against women and children, shameful and “un-Jamaican”.

“I do so again today. I call on us, as Jamaicans, to do better, as a people and as a nation. These violent acts must never become normal. Murder, rape and abuse of our young girls and boys must be condemned in every family, in every community, in every parish, even as I stand, here, and condemn it today.

“The Ministry of National Security is committed to restoring public order and safety in Jamaica. The government will continue to invest in the security forces to ensure a safer and prosperous Jamaica,” Chang told legislators.