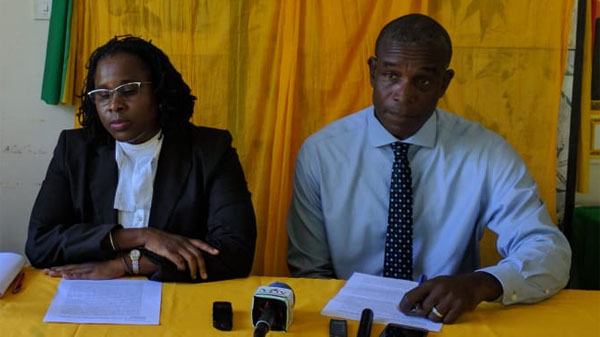 ST. GEORGE’S, Grenada, November 8, 2018 (CMC) – A senior member, of the main opposition National Democratic Congress (NDC), says that the party is “saddened and depressed” that Grenadians, who participated in Tuesday’s referendum, did not support having the Caribbean Court of Justice (CCJ), as the island’s final appellate court.

“We are really saddened and depressed that today it is not our Final Court, but at the same time, we have an obligation, as citizens, to defend our constitution and to ensure that any amendment in the constitution meets the highest standard,” said Claudette Joseph, who said persons should vote “no” if they did not understand why they were voting.

“We would want to let it be known to our Caribbean brothers and sisters, especially the judges and administrators of the Caribbean Court of Justice, that the National Democratic Congress is, and has always been, in support of the CCJ becoming our Final Appellate Court,” said Joseph, who, during interviews before referendum day, claimed that the bill to amend the constitution was flawed.

“It’s indeed depressing that we have not only failed ourselves, but the entire Caribbean, because this is the second attempt at constitutional reform to make the CCJ the Final Court,” Joseph told reporters in a news conference, at the Party’s headquarters, on Thursday.

Acting Political Leader, Joseph Andall, said that despite the two failed attempts, he hopes that this is not the end of the road.

“The lesson we learnt from this, is that you cannot embark on such an enterprise by trying to do it alone…there is a need for a unified approach, when embarking on something like constitutional reform,” Andall told reporters.

On Tuesday, 28 percent of registered voters in Grenada participated in a referendum, in which they voted against adopting the CCJ as the island’s final appellate Court. At present, the final court is the London-based Privy Council.

In the low-turnout poll, 12,133 voted against, while 9,846 voted in support of the Bill that would have altered the constitution and make the necessary changes.

Prime Minister, Dr. Keith Mitchell, has since said that he will not initiate another attempt at holding a referendum of this nature.