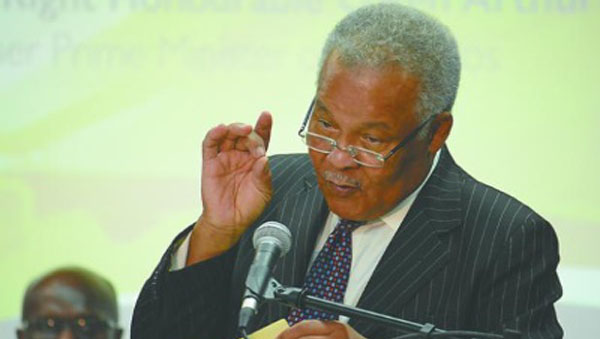 Former Barbados PM, Owen Arthur, served as a Research Fellow at the University of the West Indies’ Institute of Social and Economics Research in 1982.

BRIDGETOWN, Barbados, November 12, 2018 (CMC) – Former Barbados Prime Minister, Owen Arthur, who was recently conferred with the title, Professor of Practice: Economics of Development, by the Cave Hill campus of the University of the West Indies (UWI), is urging Caribbean governments to find new, creative and sustainable methods to fund the premier regional tertiary institution.

“The factor that stands in the way of the institution maintaining its record for quality tertiary education is the financial crisis it faces. This is a crisis of such massive proportion that it requires the deployment of a new and the most creative response to ensure its early resolution,” Arthur said at the Cave Hill Campus’ Alumni Symposium, over the last weekend.

Arthur, who was conferred with the professorship, last Saturday, said that “at the core of the crisis is the arrears, owed to it, by the governments it serves and funding arrangements that have generated a liquidity crisis that has made it difficult for the institution to honour its obligations and plan its orderly and viable development in a coherent manner”.

Last month, UWI Vice Chancellor, Sir Hilary Beckles, said regional governments were clearing their arrears to the institution and that progress is being made in recouping millions of dollars.

Sir Hilary said that the selection, made by Caribbean Community (CARICOM) leaders, for Prime Minister Timothy Harris of St. Kitts and Nevis to negotiate settlement of the receivables with fellow prime ministers, was working well.

“In the last four months, Prime Minister Harris has spoken to all the prime ministers. He has put in place a system, where his office is engaging all of them, to speak about how to get these receivables made available to the UWI.

“So far he has made significant strides. A number of countries, especially in the Eastern Caribbean [have] paid significant blocks of revenue to us, as a result of his shuttle diplomacy,” Sir Hilary disclosed.

Arthur, a noted economist, who is Barbados’ fifth and longest-serving prime minister, said that due to the rapid growth in enrolment, governments are having difficulties honouring their commitments, and the payments they make are nowhere close to the invoiced amount.

“With the rapid growth of enrolment, the bills to the governments have escalated and given their own fiscal challenges some governments of the region have increasingly found it difficult to honour the amount for which they have been invoiced. Indeed, rather than honour their bills in full, some governments have resorted to giving the UWI block grants, which are less than the invoiced amount,” said Arthur, an alumnus of the UWI Cave Hill and Mona Campuses.

“The institution is in no position to write off the arrears, nor to provide significant cuts on the arrears, since it does not have reserves or retained earnings. It also cannot persist with the current funding model, which also serves to perpetuate and, in fact, deepen its pre-existing precarious financial position,” said Arthur, who served as a Research Fellow at The UWI’s Institute of Social and Economics Research in 1982.

In his speech, Arthur said that Barbadians had not been saving towards tertiary education because they always expected it to remain government-funded.

“We have to begin to see tertiary education as an investment and people save to make investments, and that has to be the paradigm shift that comes about,” said Arthur, whose position as a professor will allow him to provide mentorship to students of economics, as well as the Young Economists Association.