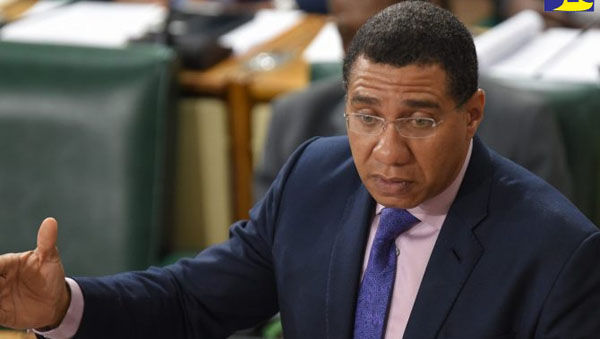 KINGSTON, Jamaica November 14, 2018 — The Jamaica government is to undertake a national mitigation, sanitation, drain-cleaning and beautification program, at a cost of $997 million, over the next several weeks, leading into the Christmas season.

The program will be implemented by the National Works Agency (NWA) and the National Solid Waste Management Authority (NSWMA).

Prime Minister, Andrew Holness, who made the disclosure during a statement to the House of Representatives yesterday, said that the program will have a national focus and will be driven by Members of Parliament (MPs).

He said that each constituency will be allocated $12 million to target critical drains, road patching, cleaning, de-bushing and sanitation.

It is being proposed that the allocation be broken down as follows: six million dollars for bushing and drain cleaning; $5 million for patching of potholes; and $1 million for general cleanup of urban towns and rural townships.

“Ultimately, it is the NWA that will go and measure the work, price it and eventually implement it. They may use a contractor or they may do it directly, and at the end of the day, we have asked the Integrity Commission to assist us in verifying the work. I could not announce a $997-million programme without at the same time ensuring… a high level of accountability,” he added.

Holness informed parliament that the allocation for general cleanup is being provided by the Tourism Enhancement Fund, while the government will finance the remainder.

Additionally, the NSWMA is being allocated $100 million for the removal of bulky waste in townships across the country. The funds are also to be used to assist in implementing a beautification project in these areas.

The Prime Minister told the House that consultations are to begin with MPs this week, and advised them to begin putting their work programmes together.

“Work will commence on the 19th of November. We expect that work should be completed by the 7th of December. Measurement and certification of completed work would then start by the 11th of December and we intend to be paying on the 13th and 14th of December. That is the timeline,” Holness said.

He is urging full cooperation from the MPs in order to ensure that the program is carried out efficiently.

“You cannot deliver your program late and expect to get paid for your constituents on time. So we are urging Members of Parliament to follow the program diligently,” he said.

Members of Parliament will be allowed some flexibility in determining reallocation of funds for drain cleaning and bushing in their constituencies, based on their specific circumstances. However, funds allotted for patching cannot be re-allocated and must only be used for that purpose.