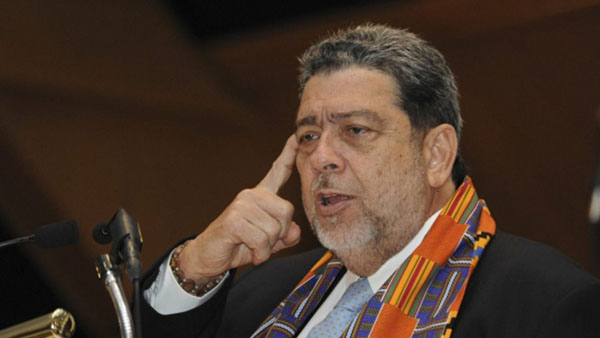 St. Vincent and the Grenadines Prime Minister, Dr. Ralph Gonsalves, said, “I just want to keep CARICOM viable, and I don’t have to try and make the CARICOM civilization great again, we are an alive civilization of legitimacy."

Amidst Ganja Reform In St. Vincent, Concerns About Growers Being Side-Lined

The bills are expected to become law, amidst concerns among three groups, involved in the review of the draft legislation — growers, the Christian Council and the parliamentary opposition — that foreign interests could benefit the most from a medicinal marijuana industry, here.

“As we, as growers, get into this part of the industry, I must tell you that the playing field is not a level one, because foreigners, the investors, have the money [and] the growers, they don’t have lands,” said Junior “Spirit” Cottle, a longstanding advocate of reform of the island’s marijuana laws.

“I am very concerned about that aspect of the development. We have called upon government and we are negotiating with them to make lands available,” added Cottle, the head of the Cannabis Revival Committee (CRC).

“We are a bit optimistic. If it is not made available, the whole issue of (the) medical cannabis industry is gonna fail. Monies might be made but not from the perspective of growers’ involvement — and we oppose that. The CRC opposes that,” said Cottle, who represented his organisation on the committee reviewing the legislation.

The drafts laws — the Medicinal Cannabis Industry Bill, The Cannabis Cultivation (Amnesty) Bill, and The Permitted Use of Cannabis for Religious Purpose Bill – were sent to a parliamentary select committee for review, after Minister of Agriculture, Saboto Caesar, presented them to lawmakers, on September 7.

Caesar said The Medicinal Cannabis Industry Bill proposes to regulate the supply and use of cannabis for medicinal purposes.

“That is, for the treatment of persons with qualifying medical conditions,” he told lawmakers.

The Cannabis Cultivation (Amnesty) Bill will grant amnesty, for the period commencing August 1, 2018 and ending July 31, 2019, or such further period as the House of Assembly may determine.

On the other hand, the amnesty law is designed to grant a reprieve to people, who have illegally cultivated cannabis, on or before the amnesty period, by providing such persons with an opportunity to surrender their crop or harvest, upon the issuance of a traditional cultivation licence, Caesar explained.

The Permitted Use of Cannabis for Religious Purpose Bill provides for the decriminalisation of the use of cannabis as a sacrament, in adherence to a religious practice, by such religious bodies as may be prescribed by order of the Minister.

These religious bodies include, but are not limited to, the Rastafarian faith at their place of worship and at an event, declared by order of the minister, to be an exempt event for the purposes of this act and for matters and purposes incidental thereto.

But the St. Vincent and the Grenadines Christian Council has voiced concerns about the move towards decriminalising marijuana here.

“Have we considered the imperialistic and neo-colonial undertones to this new ‘cash cow’? To what extent, in our quest to have a windfall, are we pandering to, and perpetuating an ideological and existential phenomenon, built on principles of exploitation and manipulation, using money and monetization as the primary medium?” the religious group asked.

“Have we sufficiently considered the possibility that the global landscape of this industry is about making space for large companies and corporations, who determine the regulatory framework, which create opportunities for them to capitalize, while ensuring (whether deliberately or coincidentally) that the small man is excluded or marginal? A process, which manipulatively uses the legitimate concern of protecting our youth and society from the proliferation of a narcotic,” it further stated.

For its part, the main opposition New Democratic Party (NDP) supports liberalisation of the marijuana bill and, citing the recommendation of the CARICOM Marijuana Commission, has called on the government to decriminalise marijuana for all uses.

However, Prime Minister, Ralph Gonsalves, has said that his government is not prepared to go that way at this time, emphasising that Kingstown is focused on a medical marijuana industry, while making provisions for groups that use the plant as a religious sacrament.

Opposition Member of Parliament, Roland “Patel” Matthews, notes that marijuana has played an important role in the economy of the district, for the past few decades.

“I am from North Leeward… and for years, some people of North Leeward used the ganja cultivation as a means of survival, as a means of getting out of whatever economic situation they are in,” Matthews said, while acknowledging that many people have lost their lives growing or transporting marijuana, as part of the trade in marijuana for recreational use.

He noted a recent press statement by the Ministry of Agriculture, listing among 30 reasons for investing in this Caribbean Community (CARICOM) country.

According to the politician, the island’s 50-year history in the [illegal] cultivation of marijuana is noted with the statement, indicating that the island has over 2,000 marijuana farmers.

“You are going to pass legislation, using the illegal activity as a backdrop, to encourage people to get involved in the industry. But while you are doing that, the persons who made your history possible, the persons who gave you the motivation of 50 years or 2,000 people planting, they are at the bottom, they are not getting anything,” Mathew said.

He said that the farmers are not getting anything because the government is saying they have to get on board with medical marijuana.

“… I really thought that we would have capitalised on the recreational aspect, because we have a niche in that area and 50 years of planting it with over 2,000 people involved, would have been enough to launch from that platform into recreational marijuana as our main thing,” Matthews said.

But Prime Minister Gonsalves has suggested that stakeholders should manage their expectations of the medical marijuana that his government is trying to establish here.

“… there is not a pot of gold at the end of the metaphoric medical cannabis rainbow. You have to work hard and smart, in this competitive business,” he said on a radio program, last week.

“Not because there is a medical cannabis industry legally that you’re not gonna have illegal trade. I am not having my feet firmly planted in the sky,” said Gonsalves, who is also the Minister of National Security and Justice.

“A man who is currently availing himself of a market opportunity in Barbados, for example, he will still take the risk associated with the illegality to do it in Barbados or Grenada, or St. Lucia, if when he makes the comparison the risk may be worth taking, the illegality, as against getting involved in the medical cannabis industry. I’m talking as a practical man of affairs and that trade to Barbados will still remain illegal because it’s not legal in Barbados.”

He said that if there is a contractual arrangement with an entity in Canada under the medical marijuana provisions, the commodity will be sent there, providing that it meets the market requirement, similarly to Antigua, which has decriminalised.

The prime minister said he does not know if Antigua has banned the importation of marijuana, noting that St. John’s has legalised possession of small quantities.

“If it’s legal there, you can’t stop ours coming in neither, similarly when we legalise here, we can’t stop the Jamaican one coming in, if there is reciprocity,” Gonsalves said, adding that in St. Vincent and the Grenadines, if a farmer has a contract with a firm that will legally buy the marijuana that was grown illegally, the government would allow it within the framework of the amnesty law.

Gonsalves said his government will provide “practical assistance” to growers through the Ministry of Agriculture and the Cannabis Authority — which the laws will establish.

“But what we have to be mindful about, what we have to be careful about is this, and this is why I say at the end of the medicinal cannabis rainbow, there is not a metaphorical pot of gold, that you have to work hard and smart in this competitive business.

“In this unique way in which we are seeking to build this industry, you can’t ask for the state to subsidise either the production end or the marketing end of ganja, or medical cannabis,” Gonsalves added.