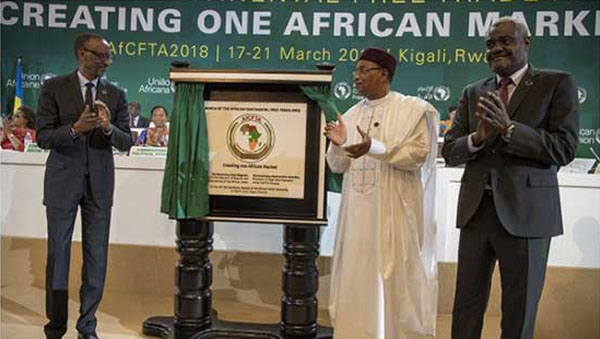 UNITED NATIONS, New York November 23, 2018 (IPS) — Following the unveiling of the African Continental Free Trade Agreement in Kigali, Rwanda, in March 2018, Africa is about to become the world’s largest free trade area: 55 countries merging into a single market of 1.2 billion people, with a combined GDP of $2.5 trillion.

The shelves of Choithrams Supermarket in Freetown, Sierra Leone, boast a plethora of imported products, including toothpicks from China; toilet paper and milk from Holland; sugar from France; chocolates from Switzerland; and matchboxes from Sweden.

Yet many of these products are produced much closer — in Ghana, Morocco, Nigeria, South Africa, and other African countries with an industrial base.

So why do retailers source them halfway around the world? The answer: a patchwork of trade regulations and tariffs that make intra-African commerce costly, time wasting and cumbersome.

The agreement creates a single continental market for goods and services, as well as a customs union with free movement of capital and business travellers. Countries joining AfCFTA must commit to removing tariffs on at least 90 percent of the goods they produce.

If all 55 African countries join a free trade area, it will be the world’s largest by number of countries, covering more than 1.2 billion people and a combined GDP of $2.5 trillion, according to the UN Economic Commission for Africa (ECA).

The ECA adds that intra-African trade is likely to increase by 52.3 percent by 2020 under the AfCFTA.

Five more countries signed the AfCFTA at the African Union (AU) summit in Mauritania in June, bringing the total number of countries committing to the agreement to 49 by July’s end. But a free trade area has to wait until at least 22 countries submit instruments of ratification.

By July 2018, only six countries — Chad, Eswatini (formerly Swaziland), Ghana, Kenya, Niger and Rwanda — had submitted ratification instruments, although many more countries are expected to do so before the end of the year.

Economists believe that tariff-free access to a huge and unified market will encourage manufacturers and service providers to leverage economies of scale; an increase in demand will instigate an increase in production, which in turn will lower unit costs.

Consumers will pay less for products and services as businesses expand operations and hire additional employees.

“We look to gain more industrial and value-added jobs in Africa because of intra-African trade,” said Mukhisa Kituyi, secretary-general of the UN Conference on Trade and Development, a body that deals with trade, investment and development, in an interview with Africa Renewal.

“The types of exports that would gain most are those that are labour intensive, like manufacturing and agro-processing, rather than the capital-intensive fuels and minerals, which Africa tends to export,” concurred Vera Songwe, executive secretary of the ECA, in an interview with Africa Renewal, emphasizing that the youth will mostly benefit from such job creation.

In addition, African women, who account for 70 percent of informal cross-border trading, will benefit from simplified trading regimes and reduced import duties, which will provide much-needed help to small-scale traders.

If the agreement is successfully implemented, a free trade area could inch Africa toward its age-long economic integration ambition, possibly leading to the establishment of pan-African institutions such as the African Economic Community, African Monetary Union, African Customs Union and so on.

A piece of good news
Many traders and service providers are cautiously optimistic about AfCFTA’s potential benefits.

“I am dreaming of the day I can travel across borders, from Accra to Lomé [in Togo] or Abidjan [in Côte d’Ivoire] and buy locally manufactured goods and bring them into Accra without all the hassles at the borders,” Iso Paelay, who manages The Place Entertainment Complex in Community 18 in Accra, Ghana, told Africa Renewal.

“Right now, I find it easier to import the materials we use in our business—toiletries, cooking utensils, food items—from China or somewhere in Europe than from South Africa, Nigeria or Morocco,” Paelay added.

African leaders and other development experts received a piece of good news at the AU summit in Mauritania in June when South Africa, Africa’s most industrialised economy, along with four other countries, became the latest to sign the AfCFTA.

Nigeria, Africa’s most populous country and another huge economy, has been one of the holdouts, with the government saying it needs to have further consultations with indigenous manufacturers and trade unions. Nigerian unions have warned that free trade may open a floodgate for cheap imported goods that could atrophy Nigeria’s nascent industrial base.

The Nigeria Labour Congress, an umbrella workers’ union, described AfCFTA as a “radioactive neoliberal policy initiative” that could lead to “unbridled foreign interference never before witnessed in the history of the country”.

However, former Nigerian president, Olusegun Obasanjo, expressed the view that the agreement is “where our [economic] salvation lies.”

At a July symposium in Lagos organised in honour of the late Adebayo Adedeji, a onetime executive secretary of the ECA, Yakubu Gowon, another former Nigerian leader, also weighed in, saying, “I hope Nigeria joins.”

Speaking at the same event, Songwe urged Nigeria to get on board after consultations, and offered her organisation’s support.

In some countries, including Nigeria and South Africa, the government would like to have control over industrial policy, reports the Economist, a UK-based publication, adding, “They also worry about losing tariff revenues, because they find other taxes hard to collect.”

While experts believe that Africa’s big and industrialising economies will reap the most from a free trade area, the ECA counters that smaller countries also have a lot to gain because factories in the big countries will source inputs from smaller countries to add value to products.

The AfCFTA has also been designed to address many countries’ multiple and overlapping memberships in Regional Economic Communities (RECs), which complicate integration efforts. Kenya, for example, belongs to five RECs. The RECs will now help achieve the continental goal of a free trade area.

Many traders complain about RECs’ inability to execute infrastructure projects that would support trading across borders. Ibrahim Mayaki, head of the New Partnership for Africa’s Development (NEPAD), the project-implementing wing of the AU, says that many RECs do not have the capacity to implement big projects.

For Mr. Mayaki, infrastructure development is crucial to intra-African trade. NEPAD’s Programme for Infrastructure Development in Africa (PIDA) is an ambitious list of regional projects. Its 20 priority projects have been completed or are under construction, including the Algiers-Lagos trans-Saharan highway, the Lagos-Abidjan transport corridor, the Zambia-Tanzania-Kenya power transmission line and the Brazzaville-Kinshasa bridge.

The AfCFTA could change Africa’s economic fortunes, but concerns remain that implementation could be the agreement’s weakest link.

“We need to summon the required political will for the African Continental Free Trade Area to finally become a reality,” said AU Commission chairperson, Moussa Faki Mahamat, at the launch in Kigali.

*This article first appeared in Africa Renewal which is published by the United Nations.