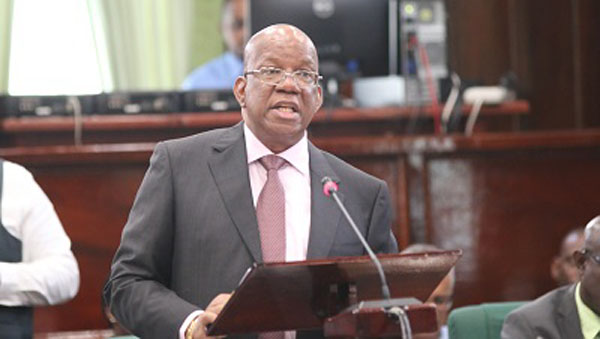 In addition, Finance Minister Winston Jordan explained, while there would be no increases in the value added tax (VAT), the David Granger administration was providing exemptions for a number of goods and services.

In a lengthy budget presentation, Jordan noted, despite lower-than-expected performance in the gold and sugar industries for 2018, Guyana’s real Gross Domestic Product (GDP) grew by 3.4 percent, despite an initial projection of 3.8 percent at the start of the year.

The Finance Minister said that with economic activity having steadily improved in the first half of the year, the growth rate, after the first six months, was 4.5 percent.

Jordan said the theme of the budget, “Transforming the Economy, Empowering People, Building Sustainable Communities for the Good Life”, underscored the government’s intention to improve the socioeconomic conditions for all nationals.

He told legislators that there will be a GUY$4,000 increase in the minimum wage to public sector workers, who will now receive GUY$64,200 a month, noting that in 2015, the minimum wage was GUY$39,000 per month.

“Mr. Speaker, as was the case last year, these increases are effective from January 1, 2018. In effect, the retroactive increase means, someone earning GUY$60,000 per month will receive a lump sum of GUY$50,400, in December, a not insignificant supplement for the holiday season.

“Moreover, Mr. Speaker, the back pay for 2018 will be paid, free of income tax, to all public sector workers, including teachers. The government has also raised the minimum basic salary for each public servant to $64,200 per month,” he added.

The Finance Minister said that old age pensioners would receive an increase from GUY$19,500 to GUY$20,500, while there would also be a GUY$1,000 increase in public assistance moving to GUY$9,000.

He added that this brings the increases to the two programs to 55 percent and 53 percent, respectively, since the coalition government came to office in 2015. The increases will take effect from January 1, next year.

The Finance Minister said that this represents a 30 percent increase in the threshold, since the government came to office three years ago.

Jordan said that while there would be no VAT increase, there would be exemptions for aircraft engines and main components/parts; concrete blocks used for housing and construction; equipment and chemicals for water treatment and production plants, as well as orthopaedic appliances and artificial parts of the body.

In addition, the government also announced VAT exemptions for educational robot kits, in order to boost the Reading and Robotics program, targeted to children in communities all across Guyana.

Jordan said VAT exemptions for boats, used in rural and riverain areas and designed for the transport of goods and persons, not exceeding 7.08 cubic metres (250 cubic feet). The import duty of five percent will also be waived.

The government also announced that differently-abled persons will also benefit from Excise Duty and VAT.

Jordan said vehicles used by them or vehicles that will be converted for their use, will benefit from these exemptions, even as he said these vehicles “must be able, either to be driven by the disabled person, or designed for such a person”.

Further, the government said it will examine the feasibility of granting a tax rebate on handsets with accessibility features for persons living with disabilities.

In his budget presentation, Jordan announced that 2019 will see preparation for the country’s Golden Jubilee and the General and Regional Elections in 2020.

He said the government has put measures in place to ensure that economic growth, expected from the oil find, will benefit all Guyanese, insisting that the country will not incur national debts, in lieu of the oil find.

He told legislators that GUY$5.4 billion has been allocated to the Guyana Elections Commission (GECOM) and of that amount GUY$2.9 billion will be dedicated to the preparation of the General and Regional elections, which are constitutionally due in August 2020.