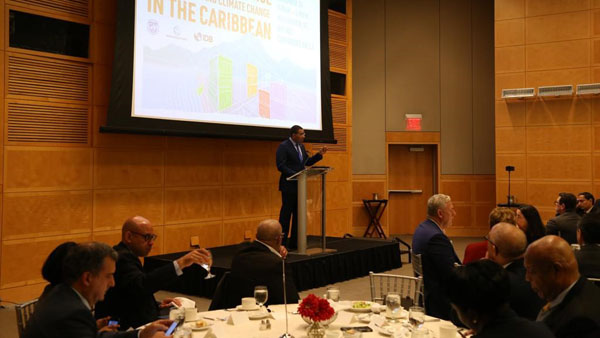 Jamaican Prime Minister, Andrew Holness, speaking at the International Monetary Fund Conference in the US capital, Washington DC, on Monday.

Jamaica Calls For Comprehensive Review Of The Impact Of Climate Change

WASHINGTON, D.C. November 28, 2018 (CMC) – Jamaica called for a comprehensive review of the impact of climate change on the Caribbean, including the “cancers” not yet integrated into the process, as it also reiterated a call for the international community to review its concessionary lending policies to Small island Developing States (SIDS).

“As natural disaster become more frequent, so do the adaptation costs imposed on us, as Small island Developing States, especially since we are on the front line of climate change impacts,” Jamaica’s Prime Minister Andrew Holness told the high level conference, on building resilience to disasters and climate change in the Caribbean, on Monday.

The event, sponsored by the International Monetary Fund (IMF), the Inter-American Development Bank (IDB) and the World Bank, is a follow up to the 2017 high-level forum, “Unleashing Growth and Strengthening Resilience”.

The IMF said it has brought together key stakeholders, including senior policymakers, multilateral development partners, and the private sector, to “explore incentives to shift the focus of policies towards building resilience and innovative, disaster-risk financing policies and instruments that would help in the region”.

Holness, who is also the chairman of the 15-member Caribbean Community (CARICOM) grouping, said that the region is facing rapid urbanisation in coastal zones, with corresponding falling populations in rural areas and out islands.

“Some more than others are facing the pending loss of limited land mass, due to sea level rise,” he said, noting that one common theme is that the cost of repeated natural disasters has been underestimated, “and this is making sustainable development and prosperity much harder to achieve, especially as we are confronted with many development challenges, which affect our economic growth.

“What is clear to many of us though, is that meeting the Sustainable Development Goals and the goal of leaving no one behind, will become increasingly costly, more challenging and likely not met, unless measures are taken to reduce the vulnerabilities and build the resilience of Small Island Developing States to the climate change impacts, which continue to set us back”.

Holness told the conference, which is also being attended by several CARICOM leaders, that this would require partnership as “well as using existing support, more effectively, and making new resources available for us to build the required resilience at  the country, community and personal level”.

The CARICOM Chair noted that last year, natural disasters in the Caribbean set back the region to the tune of US$130 billion, and he urged the conference to think of resilience “beyond these natural disaster events or what we refer to as sudden events”.

He said there is a “more comprehensive picture that we must pay attention to”, adding that behind the scenes of the natural disasters, “there are these slow-growing events, for which we have not yet, even started to, contemplate…the potential impact.

“Specifically, as SIDS, we must begin more fruitful dialogue on building resilience to impact these slow unset events, such as sea temperature rise, which, according to the National Oceanic Atmospheric Administration (NOAA), is causing our reefs to bleach at an unprecedented rate.”

He said the University of the West Indies is carrying out research to identify the DNA of coral reefs, adaptable to sea temperature rises and other matters.

Holness told the conference another of the “cancers” facing the region is that of ocean acidification, with NOAA indicating that since the industrial period, the acidification of the oceans has increased by 30 percent, with no sign of abatement.

He said such a situation could have drastic effects on the Caribbean, with the sea egg industry, the shell fish industry, the conch industry, all being “significant economic assets to us”.

He added that the sectors account for at least one percent of gross domestic product, employing hundreds of people, warning “that is slowly going to disappear if we don’t take concerted action”.

In his address, Holness repeated the call by the Caribbean, for developed countries to re-visit the criteria used for providing concessionary loans to developing countries, saying that the graduation of the region to high middle income status is seriously undermining the Caribbean’s socio-economic future.

“And, as such, we are oftentimes, not considered as high priority for the allocation of donor support from the international community. It should be quite clear, by now, that GDP, in and of itself, is not a true indicator of development.”

He said apart from indebtedness, “it does not take into consideration vulnerability to …factors, including increased intensity and frequency of natural disasters”.

“My point, and hope is, that we need to quickly find alternatives that are fair, practical, relevant and helpful to us, as Small Island Developing States. Alternatives that will ultimately enhance our disaster risk management capacity and ability to respond to the increasing impacts of climate change.”

He said the region is encouraged by the prospects of the Addis Abba Action Agenda  and the financing for development, “and note the progress being made in translating this agenda into action”.

Holness said the region as also taking note of new financing opportunities to assist “in our path to become more resilient”.