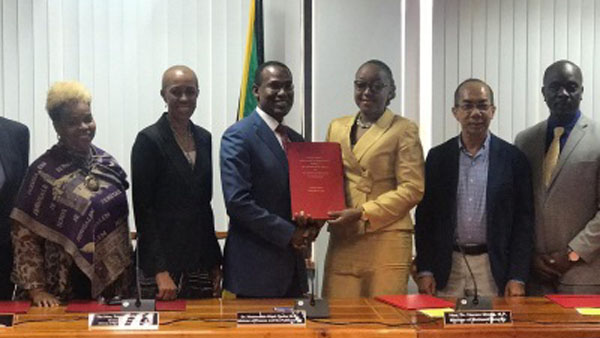 The accord was signed, late yesterday, following months of negotiations.

Finance and Public Service Minister, Dr. Nigel Clarke, told the signing ceremony that the accord means that the number of public servants, who have now accepted the government’s four-year 16 percent wage offer, has now climbed to 91 percent.

He said there is also a likelihood that the ministry would also create a vacuum, in which future negotiations between the police and his ministry, will be conducted outside of the general wage negotiations for public employees.

The main ingredient in the package is the decision to create a special commission to conciliate negotiations between the JPF and the government, which will make recommendations for compensation agreements.

JPF Chairperson, Arleen McBean, said that she was pleased with the outcome, and “appreciated and accepted” what the government eventually offered.

She said that police officers will get retroactive payments for 2017/2018, prior to the end of the year.