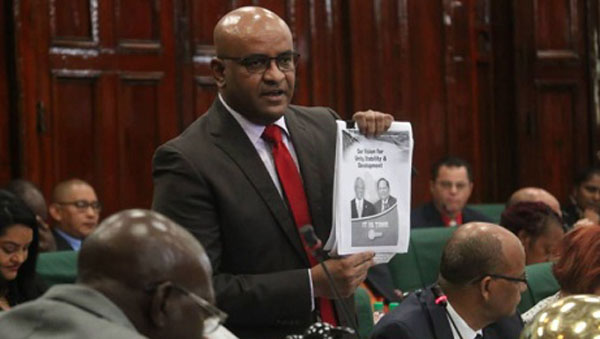 GEORGETOWN, Guyana, December 22, 2018 (CMC) – Guyana is preparing for a general election, early next year, after a government back-bencher supported an opposition motion, of no confidence against the David Granger government, late last night.

Opposition leader, Bharrat Jagdeo, who had been heckled as he outlined his reasons for the motion in Parliament, has already signalled his intention to work with the coalition A Partnership for National Unity (APNU)+AFC government leading up to the polls that could be held, as early as March.

Despite repeated urges by fellow parliamentarians to change his vote, Persaud declined.

The APNU+AFC had won the 2015 general election by a slender one-seat majority.

When the debate started, Jagdeo, a former president, described the coalition government as “incompetent and corrupt”.

He added that the government has been a total failure and has not been keeping its promises to the Guyanese people, who voted them into office.

“The people out there, they demand that we pursue this and I know there are 33 members, who have been growing fat on the perks of office and wish that this motion disappears,” he said, adding that the coalition government had mismanaged the resources of Guyana, and that is the main reason behind his decision to file the motion against the government.

The opposition leader said the government has failed on its manifesto promises and is harming democracy. He said the Granger-led administration is totally untrustworthy and that it has failed to bring any major investor to Guyana and has only been talking “about oil, oil, oil”.

“We have made the case that this government is totally useless to the people of Guyana. The longer they stay there, the more damaging it will be to our future”.

Minister of State, Joseph Harmon, who led the government’s response to Jagdeo, defended its record, adding “when you speak of harming democracy, you have to look at what the PPP has done”.

“We are confident that we have restored the symbols of nationhood in this society and this is what keeps us together,” Harmon stated.

Prime Minister, Moses Nagamootoo, described the motion as “self–serving”, saying that the opposition leader is hoping for a “fluke” in the motion being carried.

He said the motion was moved with political viciousness and resulted in the image of the country being reflected as unstable.