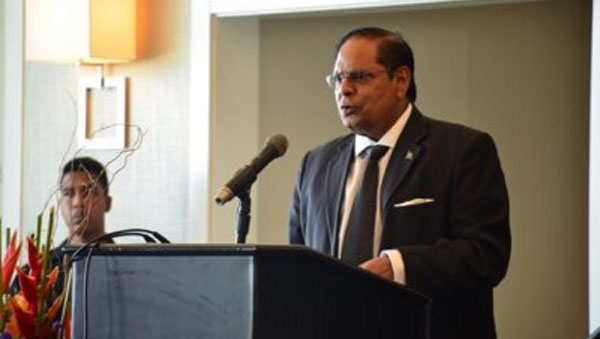 Government back-bencher, Charandaas Persaud, voted with the opposition, ensuring the success of the motion, in the 65-member National Assembly, late last night.

Persaud later said his conscience had been “stifled for long”, as he defended his decision to vote with the opposition, toppling the three-and-a-half year-old A Partnership for National Unity (APNU)-Alliance for Change (AFC) coalition government.

“I feel that almost 80 percent of the Guyanese populace would want to have this government removed, just for what it has not been done during the three-and-a-half years that APNU/AFC has been in office,” he said.

Prime Minister Nagamootoo said, while the government would be examining its options, it is clear that general elections would be held in 90 days, except if the 65-seat National Assembly decides otherwise, by a two-thirds majority.

Nagamootoo, who, until recently, was acting President in the absence of a sick Granger — who was in Cuba receiving medical treatment for cancer — urged the population to remain calm.

“There may be outcomes, which are not predictable, or outcomes, which have not been anticipated, but the outcome has to be accepted; and we want our supporters, in particular those who support the coalition government, to understand that we are going back to the polls; this is not the end,” Prime Minister Nagamootoo told a news conference.

Following the vote in the National Assembly, Persaud left the building, through a back stairway and into a waiting car.

The Prime Minister said he was unaware that Persaud had been displeased with the AFC or anyone else, and that Persaud had campaigned with him, in Berbice, for the November 12 local government elections.

Nagamootoo added that prior to the vote, a circular was sent telling legislators that “this was not one of the occasions on which one exercises a conscience vote”.

AFC Chairman, Khemraj Ramjattan, said Persaud, an attorney, was disloyal and would be expelled from the party.

But Persaud has already indicated he has no intention of remaining in the party and as a legislator, amid reports that he has since left the country.

“I am not keen on being a parliamentarian, and those who know me, will know that I’m a successful lawyer. I don’t sell my soul. I sold my conscience for three-and-half years in this parliament, to the detriment of my job. That has now come to an end,” he said.