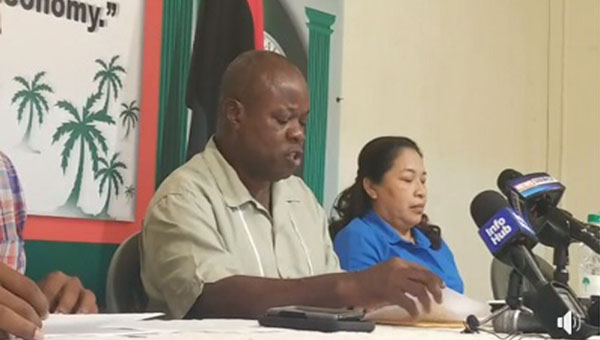 GEORGETOWN, Guyana, December 29, 2018 (CMC) – A senior official of the People’s National Congress Reform (PNCR) said, on Friday, that “forces in Trinidad and Tobago” had colluded with the main opposition People’s Progressive Party/C (PPP/C) to bring about the demise of the coalition government, here.

“It should be noted that Charrandass Persaud himself acknowledges the bribe by asking ‘what is wrong if I get paid?’ In his own words, he has admitted his embrace to the treacherous PPP culture, of getting rich through corruption and lawlessness,” said PNCR executive member, Aubrey Norton.

Persaud voted with the PPP/C, on Friday, December 21, after Opposition Leader, Bharrat Jagdeo, successfully tabled a motion of no confidence that brought about the downfall of the David Granger-led A Partnership for National Unity (APNU)/Alliance for Change (AFC) coalition government.

The APNU/AFC coalition had enjoyed a slender one seat majority in the 65-member National Assembly and Persaud later told reporters he had voted with the opposition in a bid to clear his conscience.

Norton told a news conference that the party is in possession of the information, regarding the role played by the Trinidad and Tobago forces and knows of the meetings at hotels in Trinidad, but it will not provide the details of its information to the public at this time.

He told reporters that a senior PPP/C official is obsessed with wanting to control the wealth of Guyana that will emanate from the oil sector and, as a result, was willing to do anything to achieve his objectives.

Norton said that it was for this reason, the senior PPP official “colluded with forces in Trinidad and mobilised resources to bribe a sitting member of parliament, in pursuance of his hunger for wealth and power”.

Norton added that the APNU, whose other significant member includes the Alliance for Change (AFC), to which Persaud was a sitting member when he voted to bring about the downfall of the government, is prepared to contest any general and presidential election.

But he said the government, as well as the PNCR, were keeping “all options open” and dismissed calls by Jagdeo for the present administration to resign.

Jagdeo has also said that the PPP/C has no plans to attend Parliament, next Thursday, and is open to meeting with the government before then, to discuss elections matters.

On Friday, Jagdeo held talks with representatives of the major western missions, here, to brief them on the recent passage of the no confidence motion and to outline the PPP/C’s concerns.

The one-hour meeting was attended by officials of the United States, Canadian and British missions, as well as the European Union.

Neither Jagdeo nor the officials would comment following the meeting.