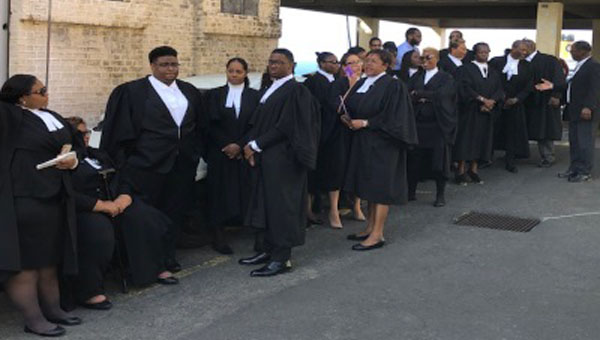 ST. GEORGE’S, Grenada, January 7, 2019 (CMC) – President of the Grenada Bar Association (GBA), Lisa Taylor, today, defended the decision of lawyers to stage a silent protest, outside the Supreme Court Registry, here, warning of a crisis in the entire judicial system, “which threatens public confidence in this system”.

“The immediate catalyst for us being here, today, was a directive or an ultimatum, given by the Grenada Bar Association in September 2018,” she said, adding “we say to the government of Grenada, enough is enough; it cannot stand that in 2019, 15 years on from the destruction of the Court, that we are still waiting for a permanent solution, something more than what has been done, has to be done”.

The GBA said that the authorities have not demonstrated with “sufficient urgency and action that they accept that there is such a crisis, that they intend to deal with this crisis, once and for all, and how they intend to do so”.

It said that the protest was also intended to call upon the Keith Mitchell government “to come up with an urgent plan to comprehensively address all of these issues”.

The GBA said that following the “complete shutdown” of all criminal and civil high courts in Grenada in May, 2018, it gave the government until the end of last year, to provide suitable accommodations to collectively house all High Courts and ancillary services.

“Every suggestive Government has blame to carry in this matter. We have been calling on the authorities to arrest the decay of the registry and, in 2019, we are not satisfied that anything of this nature that we have called the government to do, has been attempted,” Taylor said.

“We ask that the authorities come to terms with the realities and cause the fix to happen,” she said, while calling on the government to allocate the necessary funding to the Ministry of Legal Affairs or the relevant line ministry, so that a solution can be identified and be implemented.

President of the Organisation of Commonwealth Caribbean Bar Associations (CBA), Ruggles Ferguson, said that the underline problem with regional governments is that the judiciary always gets low priority.

“In others words, it is always a response to a crisis, a bandage put on a sore, as opposed to dealing with underline issues,” he said.

The GBA said recent pronouncements, about a long-promised Hall of Justice, refer to design drawings sitting at the office of the Attorney-General with no indication as to when construction may possibly start, adding the situation at the Registry continues to present a crisis for Grenada.

Last week, Legal Affairs Minister, Kindra Mathurine-Stewart, said that the government is continuing to work, assiduously, to address the housing of civil and criminal courts and other matters affecting the legal fraternity.

“Government has had discussions with the Grenada Bar Association and is taking all steps to find solutions to the existing problems,” she said, adding that “efforts are being made to secure a building to house the courts, while Government pursues a long-term solution to accommodation issues”.

“We hope to conclude negotiations on the acquisition of a building in the next few weeks,” she said, adding that an attempt is being made to address problems at the Registry, which has been the centre of several complaints.

“We have actually employed someone, within the Registry, who can assist with resolving some of the problems we now face. We expect to see a reduction in complaints over time, as we continue to make improvements in the service provided.

“Government recognises the urgency of the situation in which we find ourselves, but rest assured, we are doing all in our power to find solutions. Our courts represent a critical pillar of our society and economy, and we are committed to supporting the full functionality of the legal system,” the Legal Affairs Minister added.