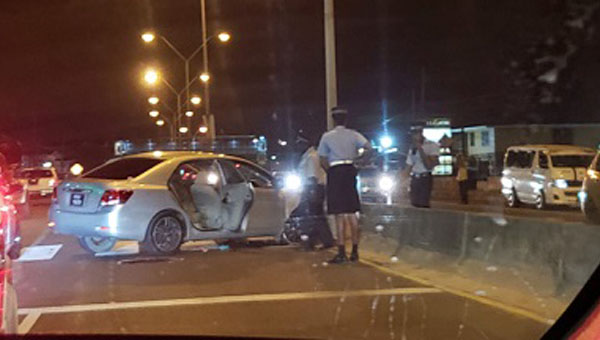 Police check out the car that was driven by late security guard, Kelvin Walters. Photo courtesy of News Source.

Eyewitness To Grenade Attack On Newspaper In Guyana Gunned Down

GEORGETOWN, Guyana, January 23, 2019 (CMC) – The Guyana police force, said, today, they had detained a suspect in the murder of a security guard, who was due to have testified in a case against three people, linked to a grenade attack on the Kaieteur News newspaper, in 2016.

Police said that the suspect had been detained at the private Woodlands Hospital, where he had gone to seek medical attention for a broken left pelvis. He remains under police guard. His accomplice remains at large.

Law enforcement officials said that the security officer, Kelvin Walters, was killed in the presence of his wife and child, as he drove his vehicle, last night. The security guard was shot in the face and died at hospital.

Eyewitnesses said after gunshots rang out from two men on a motorcycle, Walters slammed his car into them, resulting in them falling. Both men appeared injured, as they ran away from the scene, leaving the motorcycle and the firearm used in the shooting.

Media reports, here, said that the suspect is a relative of one of the three men, due to go on trial, soon, for the grenade attack on the newspaper.

At the time of the grenade attack, staffers of the newspaper were attending a wake, nearby, for longstanding crime reporter, Dale Andrews.

Walters, a former member of the Guyana Defence Force, testified at the preliminary inquiry.